This tutorial describes the basic concepts of Ethernet LAN in detail. Learn what the Ethernet LAN is and what are the differences between SOHO LAN and Enterprise LAN.

An Ethernet LAN is the combination of components that allows users to access applications and data, share resources and connect with other networks.

Common components of an Ethernet LAN are; User devices (such as Computers, PCs, Servers and Network printers), Network devices (LAN switches, hubs, firewalls, so on) and different types of media (such as Coaxial, UTP, and STP). Usually, these components are owned by the same company or organization which builds the Ethernet LAN.

Based on scalability, an Ethernet LAN can be categorized in two types; SOHO LAN and the Enterprise LAN.

The following image shows an example of a simple SOHO Ethernet LAN.

Besides end devices, to enhance the functionalities, several other network devices can also be connected with the Ethernet switch. One such a device is router. A router is used to connect the LAN network with the WAN network or with the Internet.

Nowadays, connecting to the Internet has become an integral part of any network. To get benefit from this requirement, vendors also sell consumer-grade integrated networking devices that work both as router and Ethernet switch. Typically these devices have four to eight LAN switch ports. Some models also have wireless LAN access points.

The following image shows a graphical representation of such a device. 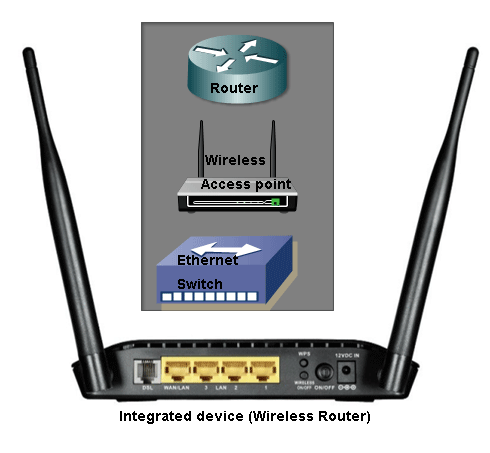 The following image shows an example of the Enterprise LAN network.

Besides Ethernet LAN switches, based on requirements, several other networking devices such as the firewall and distribution switches are also used in the Enterprise LAN. Usually, these devices are used in the middle of traffic flow.

For example, the following image shows a typical enterprise LAN spanned in four rooms. First three rooms have Ethernet LAN switches and the last room has a wireless LAN access point. To allow communication between all rooms, the switch of each room is connected to the centralized distribution switch. PC located in any room can send data to the PC located in another room, but its data will go through the distribution switch (SWD).

Both LANs use the same standards for data transportation. These standards pack data in a format, known as the frame. A frame contains a common Ethernet header and trailer.

No matter whether the data flows over a UTP cable or any kind of fiber cable, and no matter at what speed it flows, the data link header and trailer remains the same.