The main functions of routing protocols are the following.

Let\’s understand how each type of routing protocols work and how it differs from other types.

Distance-vector protocols use distance and direction to calculate and select the best route for each subnet of the network. Distance is the number of routers that a packet crosses to reach its destination.

Distance is measured in terms of hops. Each instance where a packet goes through a router is called a hop. For example, if a packet crosses four routers to reach its destination, the number of hops is 4. The route with the least number of hops is selected as the best route.

The vector indicates the direction that a packet uses to reach its destination.

The following figure shows an example of a network running distance victor protocol. 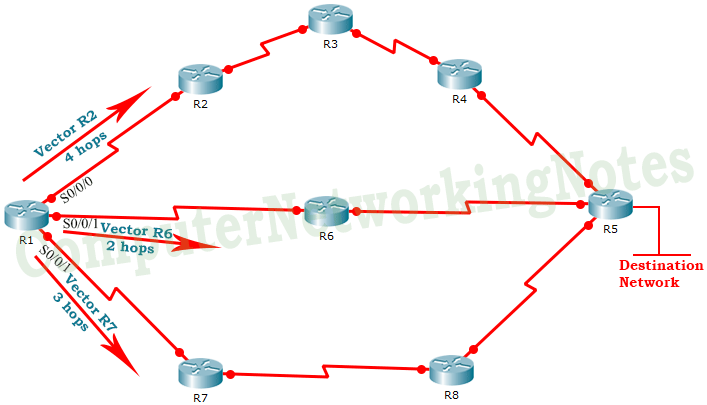 In this network, the router R1 has three routes to the destination network. These routes are the following.

Since the second route has the lowest hop count, the router R1 uses this route to forward all packets of the destination network.

After discovering all neighbors, the link-state protocols create three separate tables. One of these tables keeps track of directly attached neighbors, one determines the topology of the entire internetwork, and one is used as the routing table.

From all available routes, to select the best route for each destination of the network, the link-state protocols use an algorithm called the Shortest Path First (SPF) algorithm.

Hybrid routing protocols reduce the CPU and memory overhead by functioning like a distance-vector protocol when it comes to processing routing updates; but instead of sending out periodic updates like a distance-vector protocol, hybrid routing protocols send out incremental, reliable updates via multicast messages, providing a more network- and router-friendly environment.

That\’s all for this tutorial. If you like this tutorial, please don\’t forget to share it with friends through your favorite social site.