Cisco IOS has several built in help features that will make your configuration and management task easier.
Unique context sensitive help features make Cisco IOS most user friendly operating system.
IOS includes thousands of possible commands and parameters, knowing how to get help can save your day.

In this tutorial we will learn the help features of Cisco IOS including command abbreviation,
how to get help on commands and their specific parameters and recalling commands.

This tutorial is third part of our article “Cisco Internetworking Operating System (IOS) Explained with Examples”. Other parts of this article are available here.

This tutorial is first part of this article. In this part, I explained naming convention used in Cisco IOS. Cisco IOS name contains a lot of information about IOS such as features, type, version, platform, compression and location.

This tutorial is second part of this article. In this part, I explained Cisco IOS mode in detail with example. Different modes are used for different purpose. This tutorial will help you in choosing correct mode for assigned task.

Word help can be used to obtain a list of commands that begin with a given letter.
You know the starting letters of command, type those along with ? at command prompt and prompt will return
with all matching commands. For example, we know that our command start
with e.
Typing e? will list all commands
that start with letter e.

Take another example where we completely forgotten the command.
Type ? at the command prompt and hit the Enter key to
list the all available commands. 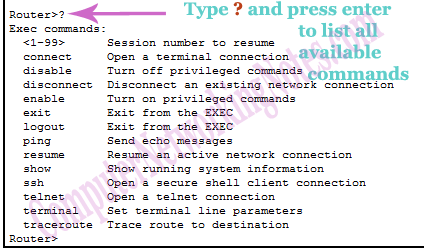 Command syntax help can be used to get the list of keyword, commands, or parameters
that are available starting with the keywords that we had already entered. Enter a ? after hitting a space and router
will return with the list of available command options. You can also use ? to know the required parameters for a command.
For example to know the parameters required by show ip command
type show ip ? and prompt will return
with all associate parameters. If prompt returns with <CR> only as option, that means router does not need any
additional parameters to complete the command. You can execute the command in current condition. 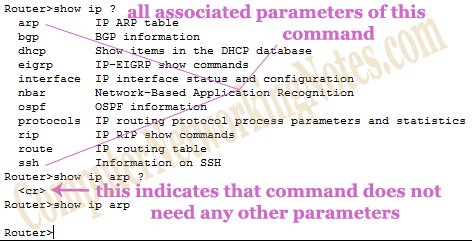 Another cool feature offered by IOS is command abbreviation and auto completion.
This is a useful feature for physically challenged people. You only need to type the characters that make the command unique
and device will internally auto complete the command. For example, you could use en instead of
enable command.
However you cannot use only letter e, since other
commands being with letter e like exit.

This is an optional features that keep records of EXEC commands that you have entered. This is useful feature specially for
recalling complex or long commands such as access list configuration commands. By default history command
would keep record of 10 commands,
you can change this value from line configuration mode with history size command. 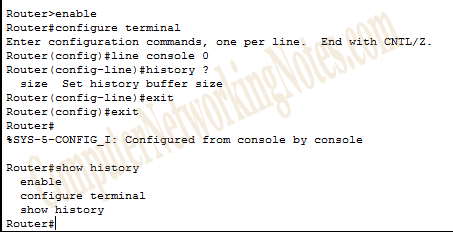 That’s all for this part in next part I will explain how to take backup of IOS and restore IOS from backup.