This tutorial explains the naming convention used in the Cisco IOS image file. Learn how to get information about the features and functions of the IOS from the IOS image file name.

But, it does not mean that all features are unique in each flavor of the IOS. For example, the way you access the IOS levels and the way you use many of the management commands are the same on all IOS flavors.

In short, if you have Cisco routers or switches that use IOS images, you have to install and manage a lot of IOS image files. However, if you know the naming convention that Cisco uses to compile its IOS image files, this process is not difficult.

Cisco assigns a unique name to each IOS image file. This name provides the following information: –

Let\’s take an example to understand this naming convention in more detail. Access the CLI prompt of your router. If you don\’t have a real Cisco router, you can use the Packet Tracer.

Packet Tracer is a network simulator software. It allows you to practice with essential Cisco devices in a simulated environment. You can download the latest version of the Packet Tracer from the following web page.

Access the privileged-exec mode and run the \”show version\” command. The output of this command, along with other information, contains the name of the IOS file that is currently running on the router.

The following image shows the output of this command on the Packet Tracer. 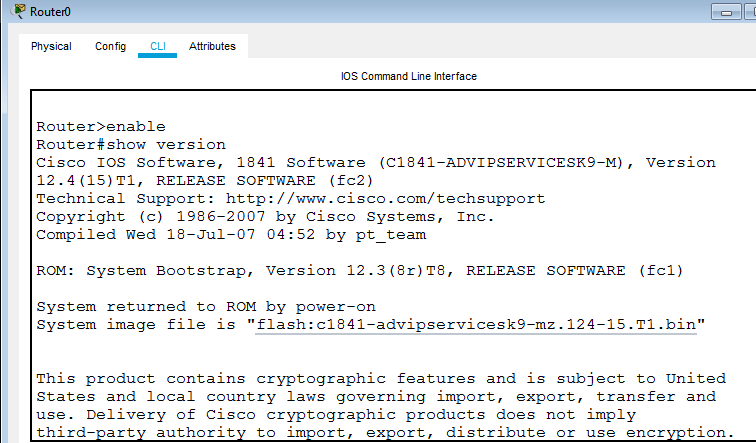 A router stores IOS files into the flash memory. You can also use the \”show flash\” command to view all available IOS files.

The following image shows the output of this command.

As we can see in the output of both commands, the name of the IOS file is the following.

The following table lists a few feature-set codes and their meanings.

The following table lists some common types of compression that are used to compress the IOS file.

If the IOS runs from the non-standard location, the next term indicates that location. The following table lists some common locations and their codes.

The last term \’bin\’ indicates that this is a binary image.

That\’s all for this part. In the next part of this tutorial, we will understand the IOS modes and how to access them. If you like this tutorial, don\’t forget to share it with friends through your favorite social platform.