Before we learn router booting process in detail, let’s be familiar with following booting components first: –

POST ( Power on self test ) is a low level diagnostic utility that performs various tests on hardware components.
It verifies that all necessary components are present and operational.
Modular slots are checked in this process for any hardware change like installing new interface or removing existing interfaces.

Bootstrap is the second utility in booting sequence. It controls the search and load process of IOS.
Bootstrap program is responsible for bringing up the router, finding IOS on all possible locations and loading it in RAM.

ROMMON is a portable IOS program that allows us to perform various diagnostic tests.
This program is also used for password recovery procedure.
It has its own mode ( Check our previous article to know more about Cisco IOS mode) known as ROMMON mode.
Boot sequence follows a conditional rule for this mode. If bootstrap successes in finding and loading operation of IOS,
then boot sequence will not enter in this mode. Boot sequence will enter in this mode automatically,
if it fails to load IOS in RAM from all possible locations.

You can manually enter in this mode for diagnostic purpose. Run reload command from privileged mode to reboot the router.
Press + C key combination ( CTRL Key with C Key ) in first 60 seconds of boot sequence.

Mini-IOS is a fallback utility that contains a stripped down version of IOS.
This is used in critical situations where IOS image in flash is not found.
Mini-IOS contains only IP code that allows you to load IOS from other resources such as TFTP Server.
Cisco IOS mode used by this stripped down IOS utility known as RXBOOT mode.

Flash is a nonvolatile memory. Data store in flash is not lost when you turn the router off.
You could assume flash as hard disk of router. Like data stored in hard disk remain safe, same as data stored in flash remain safe.
Router uses flash to store IOS image. During the boot process router load IOS file from flash to ram.

NVRAM is another permanent memory. Data stored in NVRAM is also remain safe.
Router use NVRAM to store configuration files. NVRAM uses a battery to maintain the data during the power off stage.

RAM is a temporary memory. Information stored in RAM does not remain in power off stage.
Everything in RAM is erased, when you turn off the router. RAM is the fastest memory among these memories.
In a powered on router, RAM contains all the information required to function the device.

Router goes through the three steps when booting up 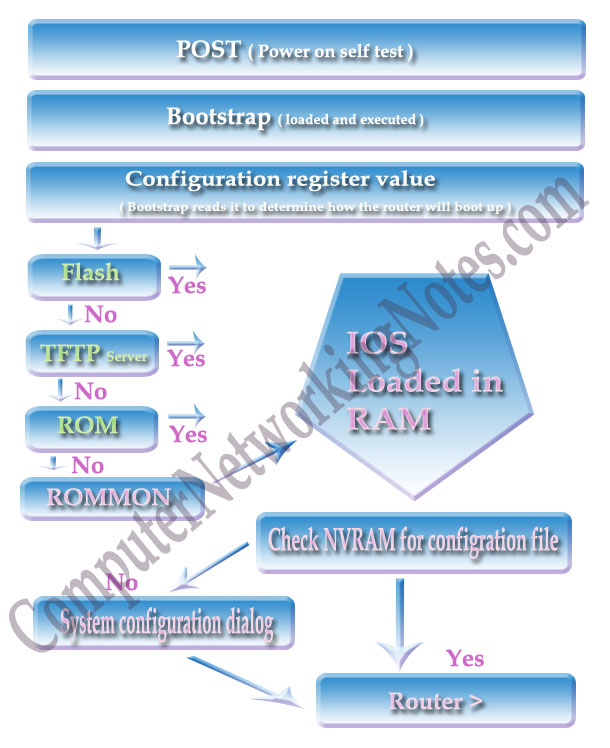 That’s all for this tutorial.