The default route is a route that a router uses to forward an incoming packet when no other route is available for that packet in the routing table. Routers use the routing table to make the forwarding decision. A routing table entry consists of two pieces: the remote network and the local interface that is connected to that network.

A default route contains all zero in the IP address. There are two versions of IP protocol, IPv4 and IPv6. In both versions, the address of the default route is the following.

All zero (0.0.0.0) in network portion and subnet mask represent all networks and all hosts in the specified network, respectively.

Command or syntax to configure a default route

To configure an IPv4 default route, use the following syntax from the global configuration mode.

To configure an IPv6 default route, use the following syntax from the global configuration mode.

In both syntaxes: the ip-address is the IP address of the next-hop and the exit-interface is the local interface of the router.

If you use the IP address of the next-hop, the router will forward packets to the remote interface of the other router (next-hop) that is directly connected to the local router and has configured with the IP address that you assign in the default route.

If you use the exit-interface, the router forwards packets from the local interface that you configure in the default route.

Let’s take some examples of the default route configuration.

The following command configures an IPv4 default route that forwards all packets from the serial 0/0/0 interface.

The following command configures an IPv4 default route that forwards all packets to the next-hop 192.168.1.1.

The following command configures an IPv6 default route that forwards all packets from the serial 1/1/1 interface.

The following command configures an IPv6 default route that forwards all packets to the next-hop 2001:DB8:1:F::1.

To view the default route configuration, use the \”show ip route\” command from the privileged-exec mode.

You can also use the \”show running-config\” command to view the command that was used to configure the default route.

The following image shows both commands with sample output. 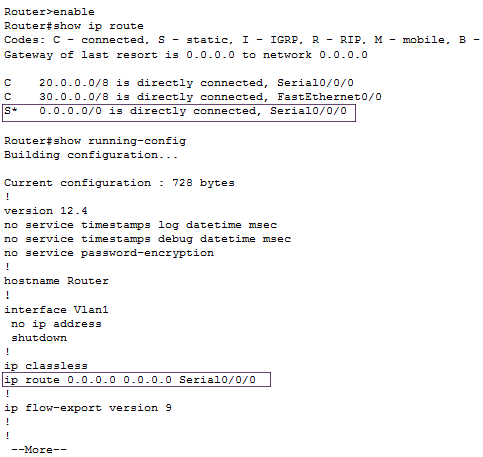 A smaller AD value is more believable by a router, with the best AD value being 0 and the worst, 255.

How a default route works in routing

Now, there can be three situations. The following table describes each situation along with the action that the router will take in that situation.

The following image shows an example of all three situations. 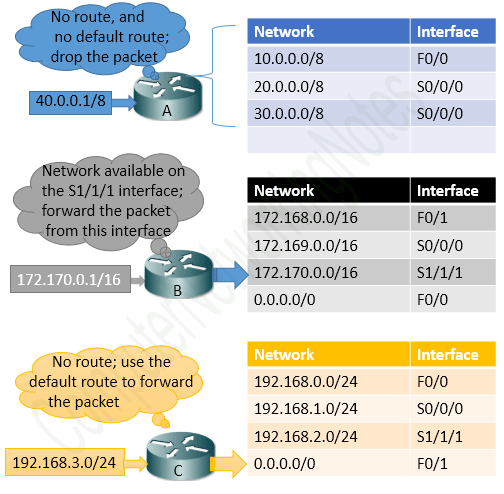