To make accurate forwarding and filtering decisions, the switch learns and stores the MAC addresses of all connected devices.
The switch stores the learned MAC addresses in a table that is known as the CAM table.

In old days of switching, when the bridges were used to be in the networking, a special form of high-speed memory, known as the content addressable memory or CAM memory, was used to facilitate the switching function.

Nowadays, the CAM table is also known as the MAC forward table, or MAC filter table, or MAC address table, or switching table, or bridging table. No matter what name you use to refer this table, it is used to store the MAC addresses of the connected devices.

In the below section, we will understand how the switch learns and stores MAC addresses in the CAM table.

When we copy the running-configuration into the NVRAM, any MAC addresses which we add statically are also saved in the NVRAM. These MAC addresses are automatically copied back into the CAM table at the startup when we restart the switch.

Adding MAC addresses in the CAM table is a very tedious and boring task. For example, if you have 1000 devices connected through the 5 switches, then you have to make 5000 (1000 * 5) entries. Furthermore, if you relocate any device, then you have to update all related entries manually.

Thanks to the dynamic learning feature, you do not need to type any MAC address. All five switches not only learn all MAC addresses automatically but also make their correct entries in the CAM table.

Let’s understand this process in detail with examples.

The following image shows a simple network. In this network, three PCs are connected through a switch. When we turn on this switch, the CAM table of this switch is empty. 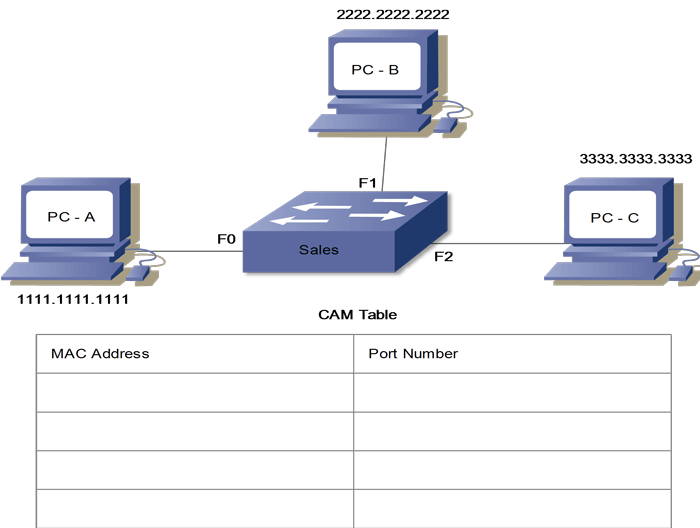 Now suppose, the PC-A sends a frame to the PC-B. Upon receiving this frame on the F0 interface, the switch takes the following actions.

The switch reads both the source and destination MAC addresses of the frame and finds them in the CAM table.

Processing frame based on the destination

Adding or updating the source MAC address in the CAM table

If the switch finds an entry for the source MAC address, it updates that entry and resets the timer of that specific entry.
The switch assigns a separate timer to each entry of the CAM table. This timer is used to age out old entries from the CAM table,
allowing room to store new entries. This feature is known as the Aging.

Once the CAM table is full, the switch has no place to store any new addresses. Aging resolves this issue by automatically removing the old entries from the CAM table. It keeps the MAC addresses of only those devices that are constantly sending the frames.

There is one more possible situation that you need to understand. If the switch finds an entry for the source MAC address with the different port information, it assumes that the device has been relocated. In this situation, the switch also updates the port information along with the timer. This feature makes the relocation of devices completely hassle-free.

Let’s back with our example. Since the CAM table is empty, the switch adds the source MAC address in the CAM table and sends out the frame from all the ports except the F0 port.

The following image shows how the switch processes the frame sent by the PC-A. 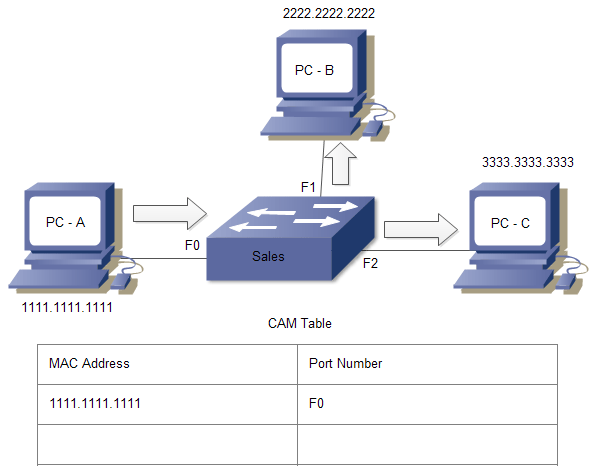 If the PC-B responses back to PC-A and sends a frame back, the switch takes the source MAC address from that frame and place that MAC address in the CAM table as well, associating this address with the interface that received the frame. Since the switch already knows where the PC-A is located, so it doesn’t flood the frame as it did the first time. This time it only sends the frame out from the F0 interface.

The following image shows how the switch processes this frame. 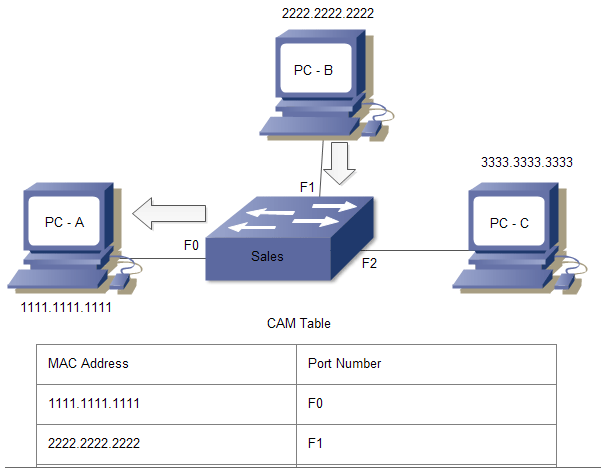 CAM table is not shareable

A switch does not share its CAM table with others. If multiple switches are used in the network, each of them will use its own CAM table to take the forwarding decision. The following image shows a network that uses two switches. 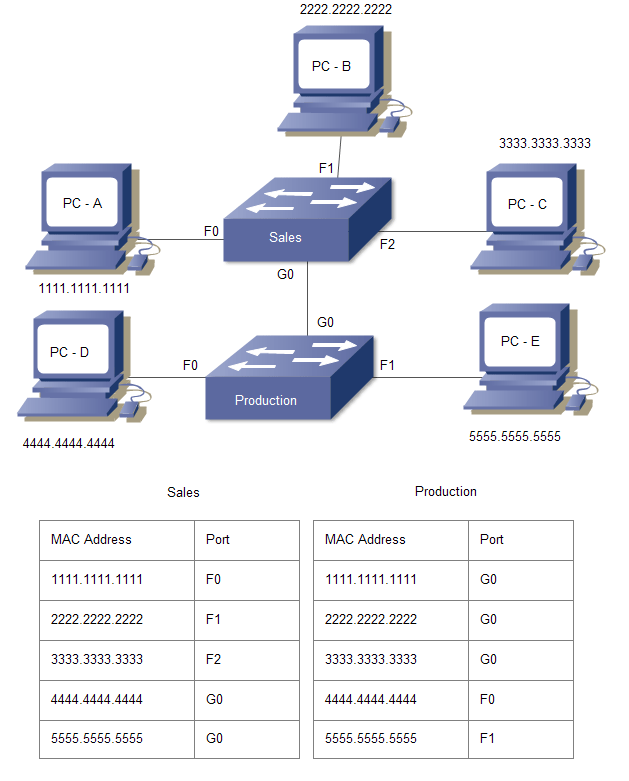 Viewing entries of the CAM table

The following image shows an example of the \”show mac-address-table\” command. 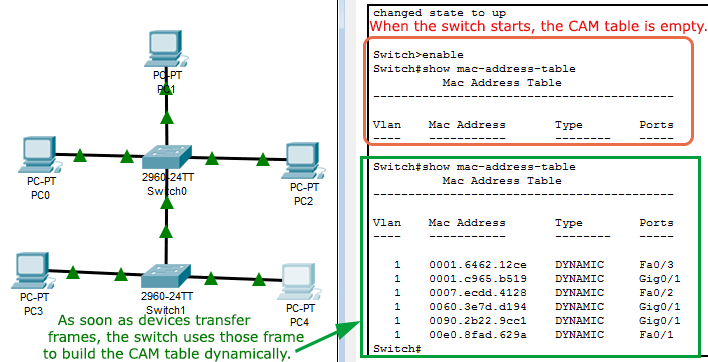 That’s all for this tutorial. If you like this tutorial, please don’t forget to share it with friends through your favorite social platform.