This tutorial explains how to configure Firewalld service in Linux with firewall-cmd command step by step. Learn how to manage (create, list, add, remove, change and delete) zones, services and ports in detail with practical example including how to add and remove interface and IP address in zone for data filter.

For this tutorial I assume that :-

This tutorial is the second part of our article \”How to configure Firewall in Linux Step by Step\”. You can read other parts of this tutorial here.

This is the first part of article. This part explains basic concepts of firewalld service such as zones, services, ports and rich language including how to disable iptables service in detail with examples.

This is the last part of article. This part explains Firewalld Rich Rules in detail with examples including how rich rules are used to configure the firewall in Linux.

We have three options to manage the firewalld service :-

Unless we have expert level of knowledge, first option is not recommended. Administrators rarely use this option for management purpose.

Third option will be available on all platforms unless RHEL is installed with minimum installation. Virtually we can perform all management tasks with this option. In this tutorial we will also use this option.

To allow temporary we will update only running configuration with allow permission. Since we did not change the startup configuration, this temporary access will be automatically removed at next reload.

To allow permanently we will update only startup configuration with allow permission. Since we did not change the running configuration, host will not be able to access the SSH service until next reload.

Let’s take some practical examples of how zones are managed with firewall-cmd command.
Login from root account and access the shell prompt.

As output indicates current default zone is set to public which is also system default zone. 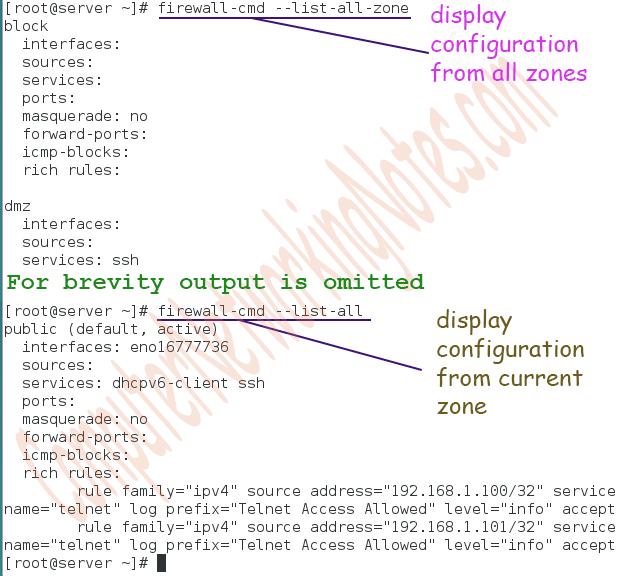 Since we used –permanent option, new zone will be available only after the reload.
To test it, access the rhcelab zone without reloading the firewall. You will get INVALID_ZONE error.

Reload the firewall with following command

Let’s add an interface in this zone. In order to do this we need the name of interface.
We can view the name of all detected interfaces with ip addr show command.

As following output indicates the name of interface is eno16777736.
If system has multiple interfaces, they will be listed subsequently. 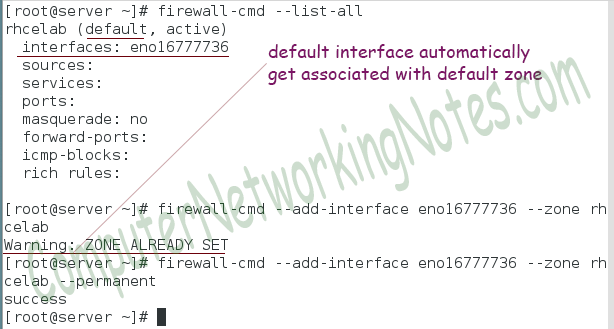 Just like interface we can also associate network address with zone.
Following command will add network 192.168.1.0/24 with zone rhcelab in running configuration. 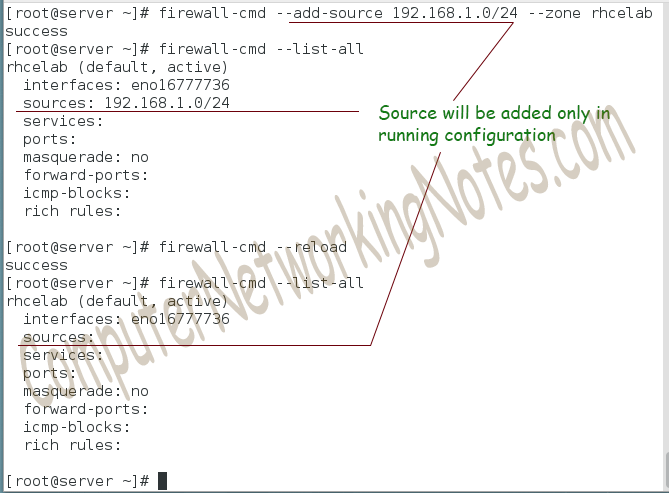 To add permanently use –permanent option. 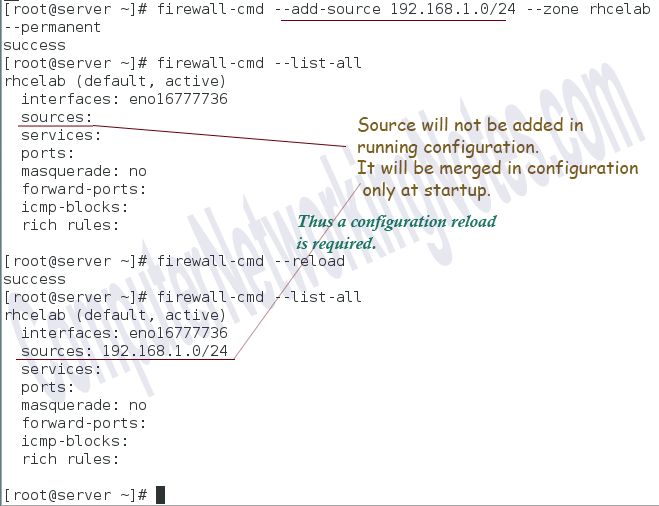 At this point we have successfully created a new zone (named-rhcelab) and set it as default zone. We have also added our default interface and lab network in this zone. We will use this zone to practice the remaining topics of this tutorial.

Let’s understand above options in detail with some examples.

Sometime pre-defined services are not sufficient. For example we may have custom applications which run their own services.
To limit these applications we have to add their associated services in firewalld.
To add new service we can use –new-service option.
For example following command will add a new service named testservice.

Once service is added we can associate it with any existing zone temporary or permanently.
To add service only in running configuration (temporary) we can use following command

To add the service permanently we will use following command

Since above command will add service only in running configuration, it will not preserve
after the reload. To add service permanently we have to use –permanent option

As we know any update made with –permanent needs configuration reload.

After reload service will be added in default zone.

To add service in other zone we need to specify the zone
name with –zone option. For example following command will add testservice in public zone. 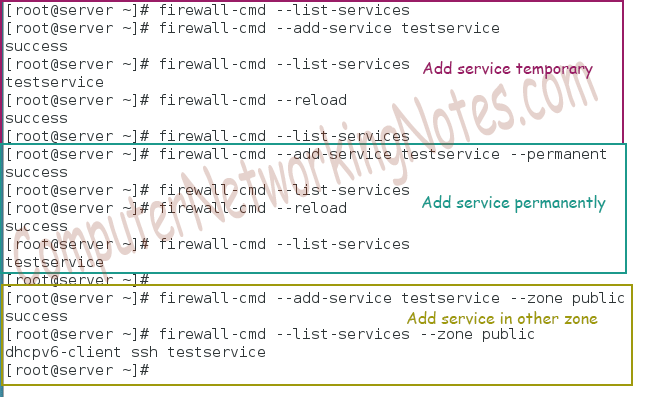 To remove a service from zone we can use –remove-service option.
Just like add operation we can remove service temporary or permanently.
For example following command will remove testservice from default zone temporary

Following command is used to delete a service from firewalld

For example to delete testservice we will use following command 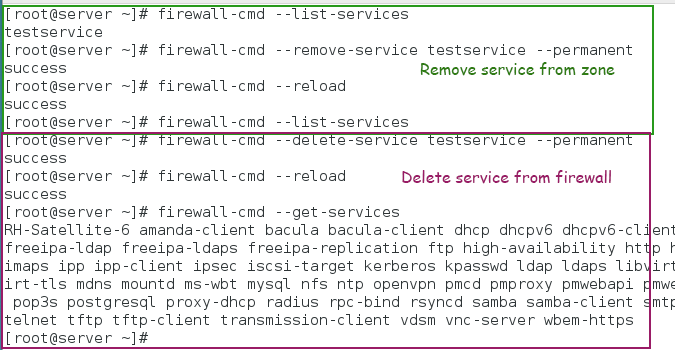 As we saw in previous section firewalld allows us to create and manage custom services.
Custom services need custom ports. Like services we can also add or remove ports from firewall.
The firewall-cmd command includes several options to manage the ports. Following table lists some important options.

Let’s understand above options in details with some examples:-

We can also list ports from particular zone with –zone option. For example to list all available ports from dmz zone we will use following command

To add port in default zone following command is used

Here PortNumber is the number of port which we want to add and Protocol is the protocol [TCP or UDP] of the port.

To add the port in other zone besides default zone, specify the zone name with –zone option as following command shows

Here ZoneName is the name of the zone in which we want to add the port.

To find out whether the port is successfully added in zone or not we can use –query-port option.
For example following command will query in default zone for TCP port 23

To remove a port from zone use following command

Just like other operation, remove operation also work with default zone unless we specify a zone name with –zone
option.

To add or remove port in other zone we need to specify the zone name with –zone option.
If require we can also make the change permanent with –permanent option.
Following figure illustrates above operation with other zone and permanent option

In this tutorial we have worked with Zones, Services and Ports. These convenient options are limited in nature.
Administrators need more control over firewall configuration. Firewalld supports rich rules which allow administrator
to define custom rules. In next part of this tutorial we will understand rich rules in details with examples.