To deal with growing security threats firewall must be used. Based on pre-defined rules,
firewall can check each passing data packet. A host based firewall is the integrated part of RHEL/Centos Linux.

Linux uses netfilter kernel module for firewall. The netfilter module in kernel allows us to
filer any incoming, outgoing and forwarded data packet even before it reaches at user level application.
To communicate with netfilter module we have two tools; iptables and firewalld.
Although it is possible to use both services at the same time, but that is not recommended.
Both services are incompatible with each other’s. Running both services simultaneously will mess-up the firewall.

Next part of this tutorial explains iptables service in detail with examples.You can read it here.
Firewalld Basic concepts Explained with Examples

In this part we will understand iptables service. For demonstration purpose I will use following RHCE LAB which is specially setup for the practice of RHCE exam objectives. 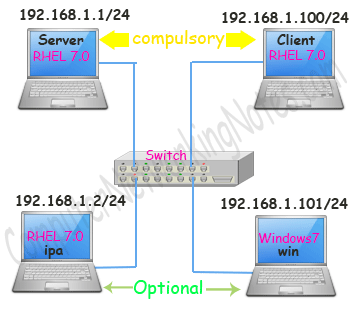 To learn how to setup above RHCE practice lab see this tutorial. RHCE Practice Lab Setup

We will configure iptables service on Server system and test it from on remaining systems.

As we know, iptables and firewalld are incompatible with each other’s. To avoid any unnecessary
complication we should always use one service while keeping disable other.
To disable the firewalld service we can use following commands

iptables requires two RPMs; iptables and iptables-services.
To find out whether the both packages are installed or not we can use following rpm query command.

If above command does not return any output then both packages are not installed.
If output returns only package then other is missing.

If iptables package is missing, we will get following error.

If iptables-services package is missing we will get following error while starting the iptables service.

iptables service will not start until we have both packages. We can install missing RPM from two commands; yum and rpm.

To install packages from yum command use following:-

To verify the installation we can use rpm query command again.

Once we have installed necessary RPM we can manage iptables service through the systemctl management tool.

To verify the status use following command

With start option service will be enabled only for this session. To start it permanently we have to use enable option.

As output indicates iptables service is up and running. Before we learn how to configure it, let’s have a quick look on some essential terminology used by this service.

As we know iptables filters data packets based on pre-defined rules.
So basically rules are the instructions which iptables should follow when a match found.
Similar rules are grouped in chains. For examples we may group rules in two chains,
in first chain we can keep the rules which will filter the incoming traffic while in second chain we can store the rules
which will filter the outgoing traffic.
There are five pre-defined chains; INPUT,OUTPUT,FORWARD,PREROUTING and POSTROUTING.
If iptables is configured, data packet must go through at least one of these chains.
Each chain has an action known as target. Target have following values

Chain can also inspect the packet based on its state. Following are some common states:-

Based on function chains are stored in tables. There are three pre-defined tables ; Filter, NAT and Mangle. 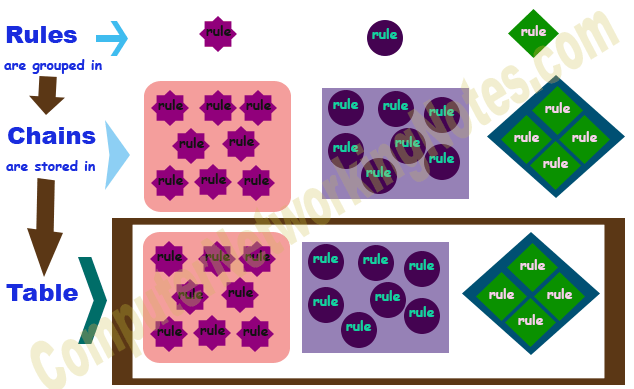 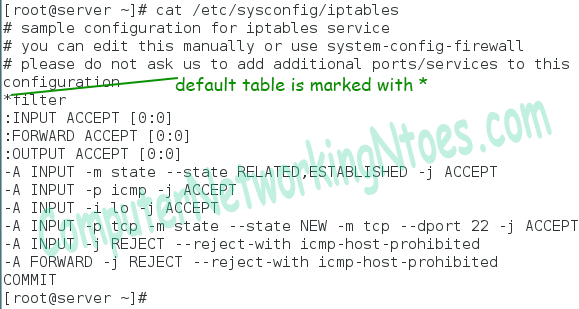 We have three options to add/update/remove rules in this file:-

First option is not recommended and third option is deprecated.
So theoretically we have only second option to manage the configuration file. Let’s understand it in details.

We have already discussed chain and target, let’s have a look on some common options.

While working with configuration files we should always follow a simple guideline, always takes backup before modify. Following this lifesaver guideline let’s make a copy of current working rules

If anything goes wrong, we can restore working iptables configuration from backup copy.

As output indicates there are no custom rules in any chains except the default rules. All chains are set to default policy which is ACCEPT ( for all traffic).

To get a better understanding of rules lets flush the default rules. 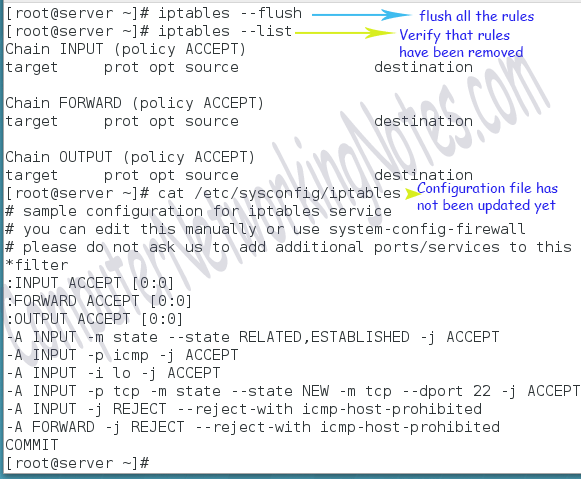 Now save the rules and view the file again

So whenever we make any change, we have to save them with service iptables save command. Besides this we also have to restart the iptables service with following command so new rules can take effect.

Add the following rules and test the configuration from respective LAB systems.

Second command says “Drop all the packets without any notification if they are coming for telnet service from network 192.168.1.0/24”.

Have you noticed conflict between rules?

To find out the answer we have to understand the basic packet processing flow.

The last requirement is blocking all ICMP request.

Following figure illustrates the above process step by step 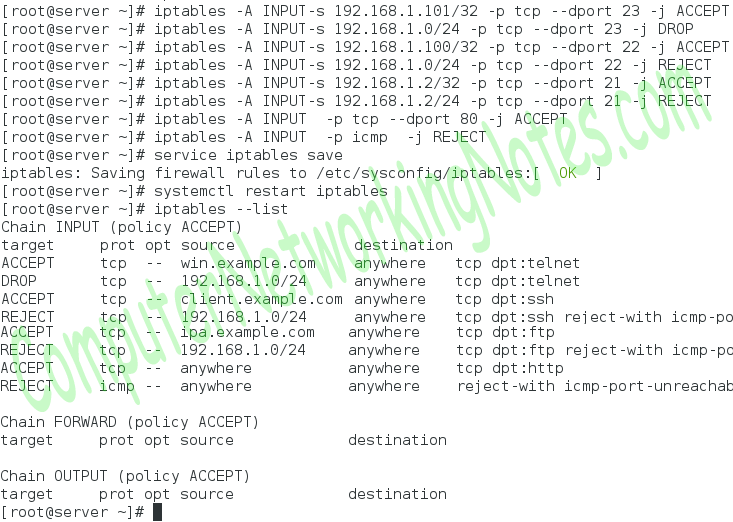 We have additional three systems in LAB specially setup for testing purpose. Let’s test our iptables firewall configuration from these systems step by step.

We have allowed http and telnet service from this computer while denying the rest. 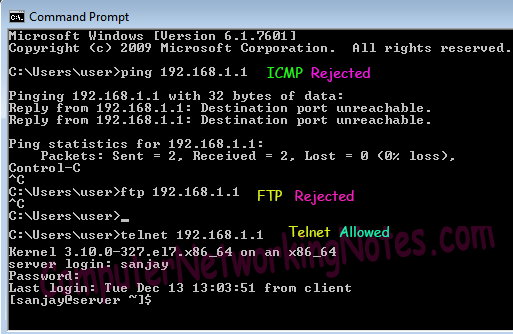 For this system we allowed http and ssh service while denying the rest. Let’s test them one by one 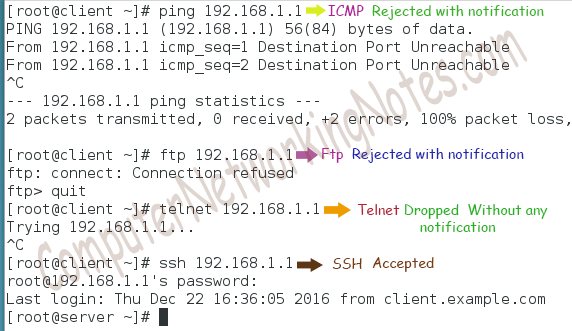 For this system we allowed http and ftp service while denying the rest. 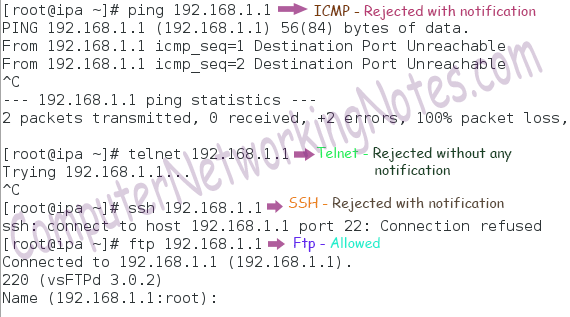 To restore the original configuration back use following command

iptables command is a low level tool. iptables command is capable to manages only IPv4 firewall rules. For IPv6 we have to use ip6tables. Another management tool to communicate with netfilter module is firewalld. Firewalld is added in RHEL from version 7. If you have Centos/RHEL 7.0 (or higher), always use firewalld. I will explain firewalld in next part of this article.