This tutorial explains Chattr command append (a) and immutable (i) attributes in detail with arguments and operation (read, copy, append, move, hard link & soft link). Learn how to delete a file secured with i attribute, remove a attribute, set/unset/list a and i attribute step by step with practical examples.

As we have already learned from previous parts of this tutorial, every file or directory have three types of permission (read, write and execute) for three types of user (owner, group and other). If attributes are not set, access will be granted based on this permission set, but if attributes are set, this permission set will be ignored while processing access request. In this tutorial we will learn the types of attribute and the way they are set on files or directories in detail with examples.

This tutorial is the last part of our article “Learn how to manage file permission in Linux step by step with examples”. You can read other parts of this article here.

This tutorial is the first part of this article. It explains how to read the Linux file permission step by step with examples.

This tutorial is the second part of this article. It explains how to set and manage file attributes and permission with chmod command in Linux from both symbolic and octal methods.

How to change default umask permission

This tutorial is the third part of this article. It explains how to change the default umask permission temporary and permanently.

The chattr command supports several attribute, most of them are less significant and rarely used in file system management. For initial stage only two attributes are important; append and immutable.

Before we understand append and immutable attributes in details, let’s have a quick look on two important commands that are used to manage and list the attributes.

chattr: – This is the main command.

attribute flag: – This is an attribute which we want to upate.

filename: – This is the name of file which attribute we want to change.

This command is used to list the attribute of file or directory. This command uses following syntax.

lsattr:- This is the main command.

Now we know the both necessary commands used in managing and listing the attribute, let’s have some practical examples to understand attribute in detail.

How to set / unset / list a (append) attribute (Practical Example)

To understand it practically, let’s create a directory /demo and a test file test-file under this directory.

The /demo directory will be used to explain and perform all examples used in this tutorial. If you are following this tutorial with system, you should consider deleting this directory once you are finished with all exercises. This way, you can understand this concept without changing anything in existing file system.

Before we assign any attribute to this file, let’s check the default owner and attributes.

As we can see in above output, root is the owner and no attribute is set so far. Let’s add a (append) attribute on this file and verify again that attribute is added successfully.

As above output shows a (append) attribute has been set successfully. Now all classical file permission will be overruled by append attribute.

Regardless how much permission a user have, he will be able to perform the file operations allowed by append attribute only. To see it in action, let’s perform all regular file operations one by one. 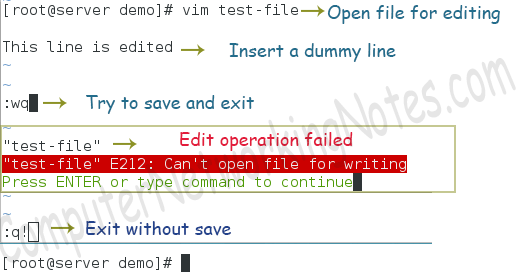 Following table summarize the test result from above outputs.

In copy or soft link operation, attributes are not inherited from source file.

As we can see in above output, append attribute is not copied with the content of file. Since destination files are not protected with append attribute, they can be deleted as normal files.

How to remove a (append) attribute

To remove an attribute, following command is used.

Once attribute is removed, file can be deleted as a regular file.

How to set / unset / list i (immutable) attribute (Practical Example)

The immutable attribute can also be managed in the same way as we managed the append attribute. Let’s create another file named dummy-file in directory demo and set immutable on it.

Let’s perform all regular file operations again to see what action is permitted while immutable bit is set on file. 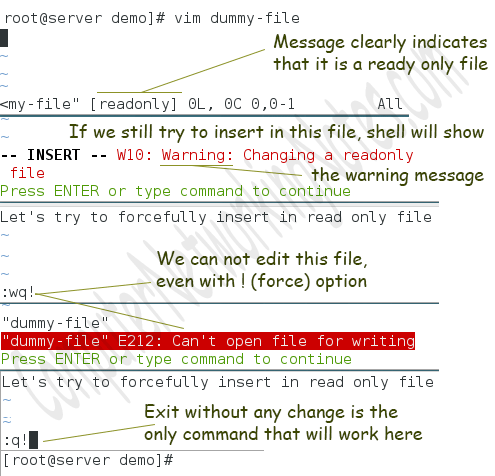 Following table summarize the test result from above outputs.

As we know, a copied or soft link file does not inherit any attribute from parent; it can be removed as a regular file.

How to delete a file secured with i (immutable) attribute

To delete a file secured with immutable bit, we first have to remove immutable flag or attribute. Once attribute is removed, file can be deleted as a regular file.

That’s all for this tutorial. In next tutorial we will learn another Linux topic in detail.