Let’s take an example. The following image shows a simple network. In this network, a pc and a server are connected through the switches. 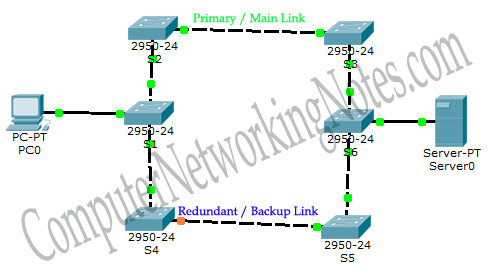 There are two links between the PC0 and the Server0.

Basic concepts of the switching

To know which device is connected to which port of the switch, the switch learns and stores the MAC addresses of all connected devices in a table that is known as the CAM table.

When the switch receives a frame, it looks at the destination MAC address of the received frame in the CAM table. If it finds an entry for the destination MAC address in the CAM table, it forwards the frame from the port that is mentioned in the entry. If it does not find an entry, it forwards that frame from all of its ports except the port on which that frame arrived. This process is known as the frame forwarding.

Switch takes forwarding decisions based on the CAM table entries. Since both the multicast and broadcast address can’t be added in the CAM table, frames which have these addresses in the destination field are always flooded through the switch.

To know more about the learning and forwarding process of the switch, you can check the following tutorials.

This tutorial explains the address learning process of the switch in detail with examples.

This tutorial explains how the switch takes forwarding decision in detail with examples.

A switching loop occurs when more than one link exists between the source and destination devices. As explained above, a switch always floods three types of frames; unknown unicast, multicast and broadcast.

If a switch receives any frame of these types, it will forwards that frame from all of its ports except the port on which the frame arrived. If the switching loop exists, the forwarded frame will be switched in the network endlessly.

Let’s extend the above example. Suppose, PC0 sends a broadcast frame. Switch S1 receives this frame. Since this is a broadcast frame, it forwards this frame from all remaining ports except the incoming port. Other switches also follow the same concept. Since a loop exists between switches, the forwarded frame keeps switching between the switches endlessly.

The following image shows this situation. 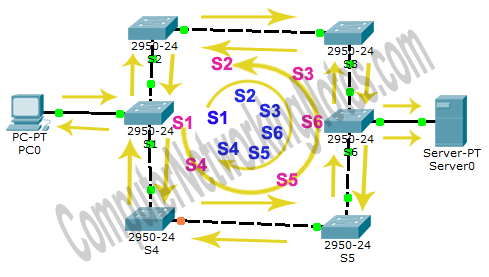 This way, a looped frame can run in the loop for a long time (hours, days, literally forever if the switches and links never failed).

Disadvantages or side effects of the loop

In nutshell, a layer 2 switching loop creates three major problems; broadcast storm, duplicate frames, and unstable CAM table. If a loop exists, a single looped frame is sufficient to decrease the performance of the entire network by consuming the bandwidth and CPU power of the affected devices.

This tutorial explains how the switches automatically find the switching loops and remove them.

That’s all for this tutorial. If you like this tutorial, please don’t forget to share it with friends through your favorite social channel.