What is a linux environment variable

If you are not familiar with programming language you can understand linux variable as a container with name which keeps value inside it. This value could be location of all executable files in the filesystem, the default editor that should be used, or the system locale settings.

Here comes the magic of linux environmental variables. Linux have a PATH variable. With the help of the PATH variable, full path is not required. The bash shell automatically searches through the directories listed in a user\’s PATH variable for the command that user just typed at the command line. When a matching command found shell run it. In this way environment variable provides a simple way to share configuration settings between multiple applications and processes in Linux.

How to show linux environment variable

The env utility can also be used to show linux environment variables.

now we can read the tmp_file with less command.

Use up arrow and down arrow key to scroll. Press q to exist from file

After reading you can simple remove the temporary file

How to set linux environment variable

Linux environment can be set in three ways.

Now we would add our directory in this path. Make a directory

To add this directory in path run following commands

Now move in our custom_script directory and make a sample script

Temporary variable only available in current session. To test it log out from current user and login back.

Run sample_script again. This time you will get command not found error.

As you seen temporary variables are available only on that session. We can make those variables permanent. For security reason you should not define an environment variable globally unless you have sound understanding of linux system. For instance, you might want to add /home/user_name/custom_script to the PATH variable for a particular user. In such a case define it locally. As you do not want all other users on your system to have that in their PATH too. 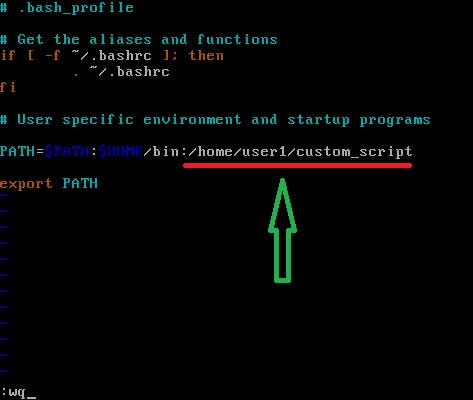 To update the variable, re-login required.

Now check that our custom path is available

Login from root and move to /etc

Make a simple test script and make this script executable

This script print a simple welcome message for all users

We have successfully added global script. After testing to remove it login back from root