This tutorial explains Linux permission levels (owner, group & other) and permission types (read, write & execute) in detail with examples including how to change the ownership of file and directory (with chown and chgrop command) and read the applied permissions on an object from output of ls –l command step by step.

Just like other operating system, Linux also protects resources with a set of permissions.
These permissions define how a user should be allowed to access the resources.
A user is anyone who accesses the resource such as user account, system process or application.
A resource is an object which is being accessed by user such as file, directory or device.

Let’s take an example, user vikarm whose primary group is developer created a file named config.
In this example, file config is the object, user vikarm is the user owner, group developer is the group owner and rests are the others.
So, whatever permission file config has in owner, group and other fields will apply on vikarm (user),
developer (group) and remaining (others) respectively.

This tutorial is the first part of our article “Learn how to manage file permission in Linux step by step with examples”. You can read other parts of this article here.

How to use chmod command in Linux Explained with Examples

This tutorial is the second part of this article. It explains how to set and manage file attributes and permission with chmod command in Linux from both symbolic and octal methods.

How to change default umask permission in Linux

This tutorial is the third part of this article. It explains how to change the default umask permission temporary and permanently.

How to set immutable bit with chattr command

This tutorial is the last part of this article. It explains how to set immutable or sticky bit in Linux including how to set append attribute.

How to read default file permission

If a hyphen sign is used in any type field then that level does not have that type of permission.

User Sanjay created a file named record. The primary group of user Sanjay is Account. The group Account has two members;
Sanjay and Krishna. Permission on file record is assigned as rwx in user level, rw- in group level and r– in other level. 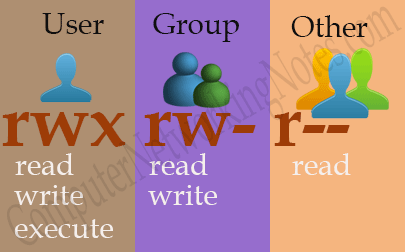 Permission in others level is set to r–, which means all remaining users can only read this file. They cannot write or execute this file.

Let’s take a practical example to understand how all this work at shell prompt.

Permission Type: – This field has eleven sub fields. Each field represents a special meaning in permission.

Next nine fields show the assigned permission types (read, write and execute) in each level (user, group and other).

Last field shows a special type of permission which we will understand in detail with examples in last part of this tutorial.

Hard links: – Number of hard links this object has.

How much a user has permission on object (file or directory) is determined in following order.

Owner, group and other are always checked in same sequence. Once a match is found, further levels are ignored.

The chmod command is used to change the permission types. Second part of this article explains how to configure and
manage the file permission in detail with example.

User test-owner has all permissions on file. He should be able to read, write and execute the file. Let’s it check out.

Use Ctrl+d key combination to save and exit from this file.

If user is able to write the file, it means he has the write permission.

If user can read the contents of file then he has the read permission.

If user can run above command then he has execute permission.

User test-owner also has all permissions on directory. He should be able to list, write and navigate through the directory. Let’s it check out.

If user is allowed to change the directory then he has execute permission.

Let’s test all permission types one by one, as we have just done from test-owner user account.

As output shows user test-group is unable to perform write action while he is allowed to perform read and execute action on both objects.

In this example, other has no permission on file test-file and read permission on directory test-dir.
To test these permissions, we need a user who is neither the owner of object nor belongs to the primary group of owner who owns the object.
For this purpose create a separate account “test-other” and exit
from user “test-group” and switch to user “test-other”.
Now test all permissions step by step.

As above output confirms that user test-other is only able to navigate through the test-dir directory. He is unable to perform any other tasks.

How to change ownership of file and directory

To understand it more clearly let’s take a practical example. 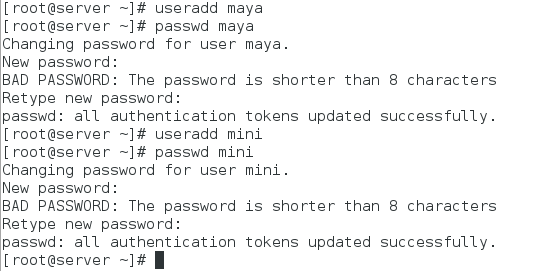 Add a group named webdeveloper and add both users in it. Create a folder webproject and view its default permissions.

Can you figure out what permissions user maya and mini have on directory webproject?

Since user maya and user mini are neither the owner of directory nor belong to the primary group of owner,
they will be considered as other and other has –x permission on directory. As we know –x permission for directory means they
can navigate through this directory but they cannot list or create the content in this directory. 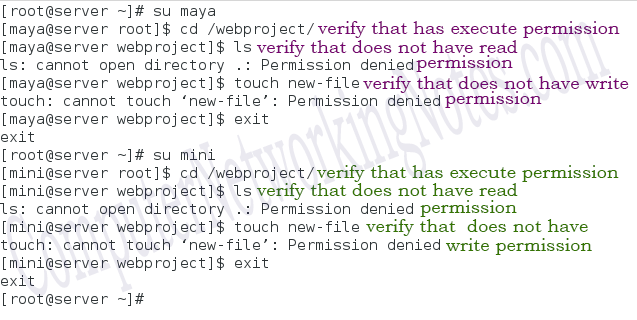 To change the ownership, following command is used.

Since same command is used to change the ownership of both user and group, a dot (.) or colon ( : ) is used in front of the group name.

Let’s change the user ownership to user maya and test all permissions again from both users. 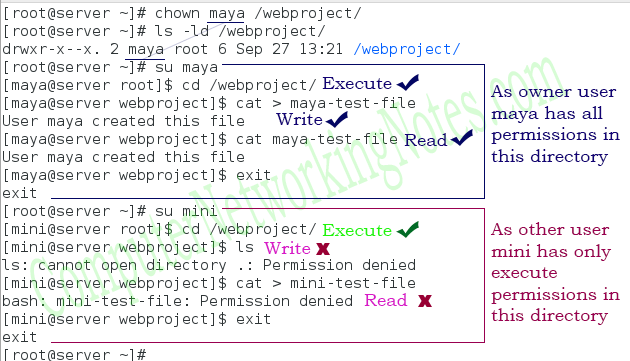 As we can see in above output, user maya now has owner permission while user mini still has other permission.

Now change the group ownership to group webdeveloper and test all permissions again.
To test other permission, use any user account which is not the member of group owner. 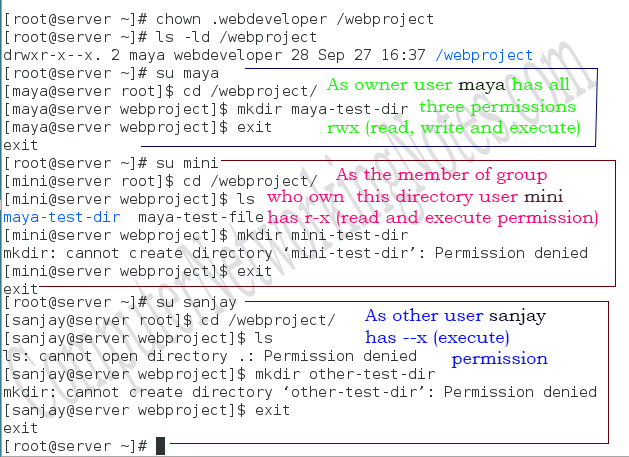 As we can see in above output, being a member of webdeveloper group user mini got r-w permission on directory webproject this time.

Changing both user and group ownership with single command

We can specify both user owner name and group owner name in single command.

There are two important rules which we have to follow while updating both ownerships in single command.

The –R option is used to change the ownership recursively.

If we only want to change the group ownership, we can also use chgrp command instead of chown command.

Since this command is used to change group owner only, it does not need any dot (.) or colon (:) in front of the group name.

That’s all for this part. In next part of this article we will learn how to configure and manage file permissions step by step with examples.