This tutorial explains how to manage GPT disk partitions and convert MBR disk in GPT disk from gdisk command in detail. Learn how to create, list, format, mount (temporary and permanent), remove and delete GPT partitions in Linux step by step with practical examples.

For this tutorial I assume that you have either non-partitioned disk space or have a separate disk for exercise. If you are using virtual program (such as VMware or Virtual Box) for the practice, I suggest you to add a new virtual hard disk. To learn how to add new virtual disk in VMware please see the first part of this tutorial.

This tutorial is the third part of our article “Linux Disk Management Explained in Easy Language with Examples”. You can read other parts of this article here.

For this exercise we added one additional virtual disk in our system. We can list all attached hard disks with fdisk –l command. 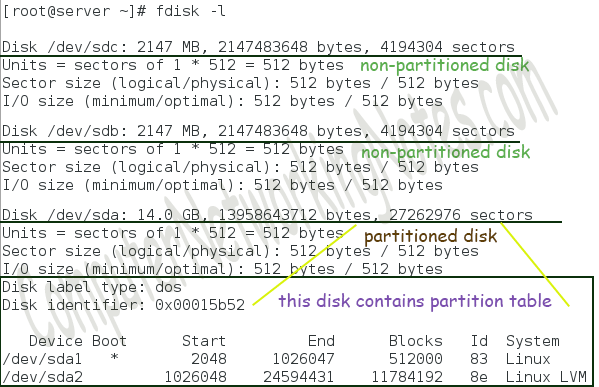 As above figure shows there are two un-partitioned disks /dev/sdb and /dev/sdc. To figure out which disk we added recently check its sequence number. Recently added disk will be last in sequence. Sequence starts with sda and goes up to the last disk. For example if there are three SCSI disk, first disk will be sda and last disk will be sdc.
We will use /dev/sdc disk in this tutorial.

Although we can use fdisk command to create GPT partitions, but GPT support in fdisk is added recently and not in stable stage.
So it is better to use gdisk utility which is specially created for GPT disk.

Let’s initiate gdisk command. This command needs the name of disk where we want to create the partition as its argument. 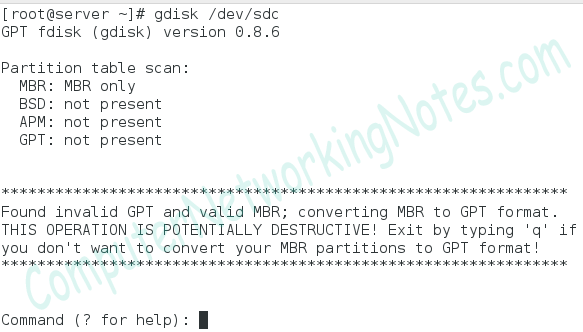 We can use only one partition scheme from MBR or GPT. If disk is used for MBR partition previously or it contains any MBR partition currently, we will get above warning message.

We used the same disk /dev/sdc in second part of this article to practice the MBR partition with fdisk command. At the end of that practice we deleted all partitions but kept MBR record in hard disk.

Before we start creating partitions let’s view the current layout of disk with p command.

In GPT partition scheme we are allowed to create maximum 128 partitions.

Due to huge numbers of supported partition, GPT does not distinguish partitions in primary, extended and logical partitions. In GPT all partitions are equal.

To learn more about GPT partition scheme, see the first part of this tutorial which explains this and other relative topics in detail with examples.

Type the last available sector for partition. Alternatively we can use KiB, MiB or GiB units to define the size of partition. (To learn what are the differences between KiB, MiB, GiB and KB, MB, GB, see the first part of this article.)

Each partition uses a special marking known as partition system identifier. This marking is used to identify the purpose of partition. To print all available partition types we can use l command.

Unless we change the type of any partition it is marked as Linux Standard partition. But if requires, we can change it here. In next part of this tutorial we will learn how to change the partition type, for this part let’s keep the default and press Enter key. 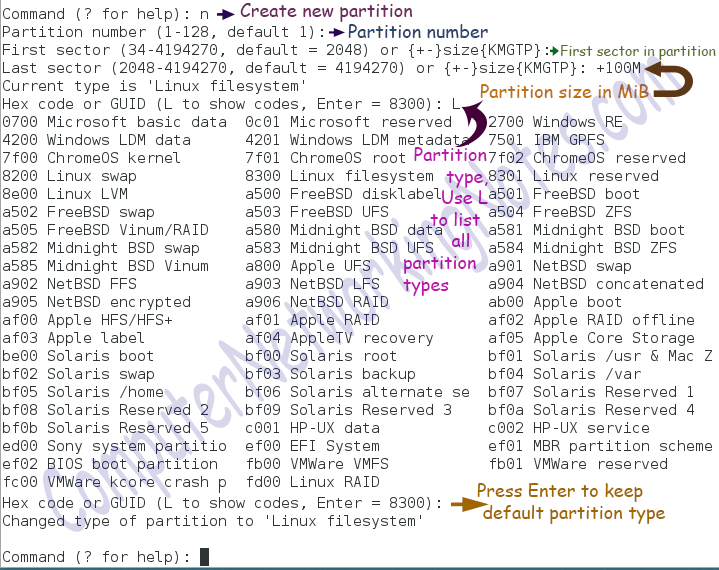 We can verify the creation of partition with p command

Following the same way we can create more partitions (maximum allowed 128) as per requirement. To view the available space for new partition use p command.

As above output shows there are total 4194270 sectors available in hard disk. From which we used only 2508799 sectors in partitions. 1685471 sectors are still available for partitions.

Just like fdisk, gdisk also keep all changes in memory, nothing will be saved in hard disk until we confirm the same.

To accept the change type w and press Enter key

Since changes once written in disk cannot be reverted, gdisk will ask for final confirmation. This is the important feature. If you made any mistake in above process, just type N here and nothing will be changed in hard disk.

If we are working with a disk which contains mounted partitions, we may get following warning.

WARNING: Re-reading the partition table failed with error 16: Device or resource busy. The kernel still uses the old table. The new table will be used at the next reboot or after you run partprobe(8) or kpartx(8) Syncing disks.

This message indicates that gdisk cannot update the in-memory kernel partition table because disk is busy (mounted). Kernel reads partition table when system boots. So the kernel will be updated about this change at next reboot automatically. Meanwhile if we want to update the kernel immediately, we have to use partprobe command which force kernel to reread the partition table.

These partitions are useless unless we put a file system in them. File system is a logical container which allows us to store files and directories. To learn more about file system see the first part of this tutorial.

How to create file system

To create a file system in partition we have to format it with supported file system. To format a partition following command is used.

Some common supported file systems are ext3, ext4 and xfs. Let’s format the recently created partitions with these file systems. 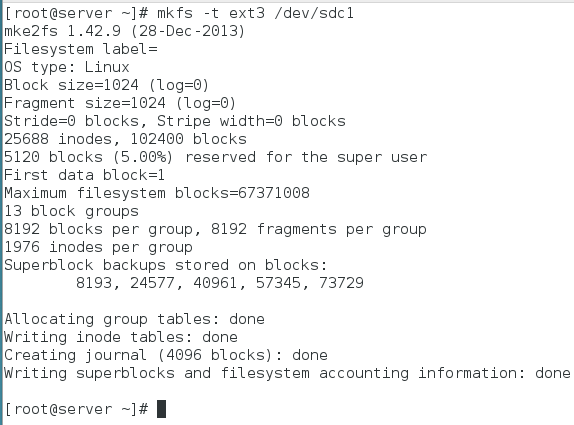 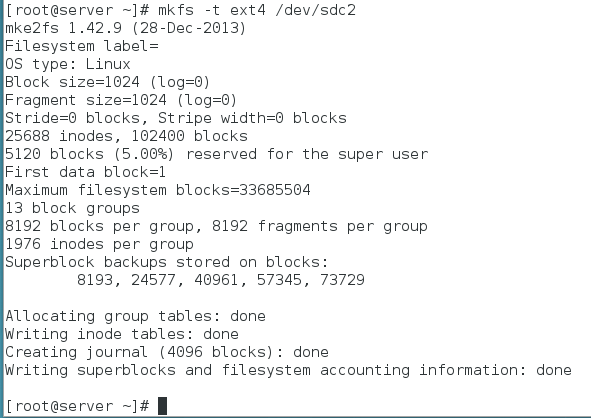 If disk was formatted with xfs system previously, mkfs will detect that and display a warning message. To ignore this message and create new file system use –f option.

Now partitions have file system, can we use them for data storage now? No, even though partitions are ready to use, we cannot use them until they are connected with primary directory structure (Main Linux file system).

where to mount :- This is the directory which we will use to access the mounted resource. 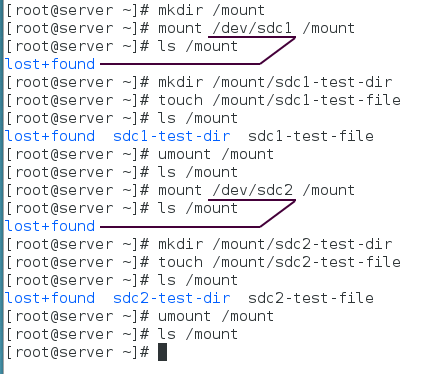 As above figure shows whatever action we performed in mount directory was actually performed in respective partition.

Temporary mount option is good for partitions which we access occasionally. If we access partition on regular basis then this approach will not work. Each time we reboot the system all temporary mounted resources are get un-mounted automatically. So if we have a partition which is going to be used regularly, we should mount it permanently.

Each resource in file system has a unique ID called UUID. When mounting a partition permanently we should use UUID instead of its name. From version 7, RHEL also uses UUID instead of device name.

If you have a static environment, you may use device name. But if you have dynamic environment, you should always use UUID. In dynamic environment device name may change each time when system boots. For example we attached an additional SCSI disk in system; it will be named as /dev/sdb. We mounted this disk permanently with its device name. Now suppose someone else removed this disk and attached new SCSI disk in the same slot. New disk will also be named as /dev/sdb. Since name of old disk and new disk is same, new disk will be mounted at the place of old disk. This way, device name could create a serious problem in dynamic environment. But this issue can be solved with UUID. No matter how we attach the resource with system, its UUID will remain always fix. 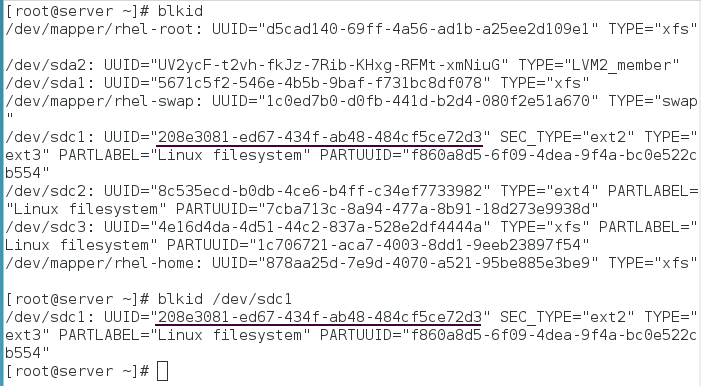 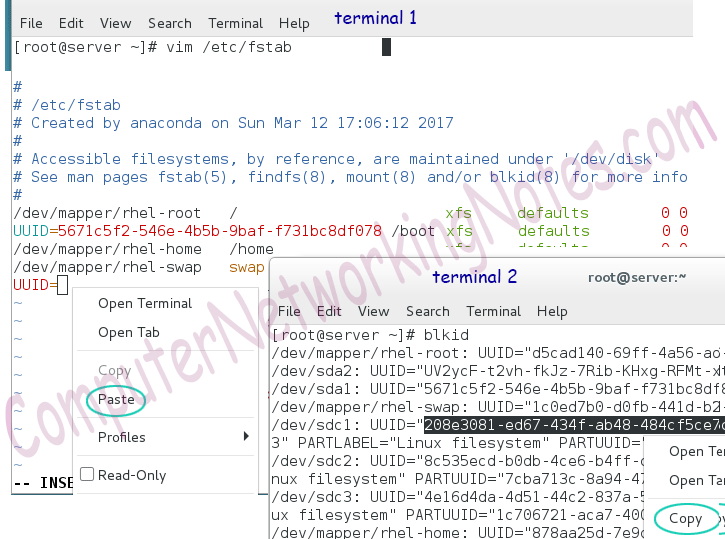 After saving always check the entries with mount –a command. This command will mount everything listed in /etc/fstab file. So if we made any mistake while updating this file, we will get an error as the output of this command.

The df –h command is used to check the available space in all mounted partition. We can use this command to verify that all partitions are mounted correctly.

Above output confirms that all partitions are mounted correctly. We put some data in /dev/sdc1 and in /dev/sdc2 while these partitions were mounted temporary. Let’s verify that is available in respective partitions.

We have successfully finished this practice. Now it’s time to clean up the system for next practice.

How to delete partitions

We cannot delete a mounted partition. Un-mount all partitions which we created in this exercise 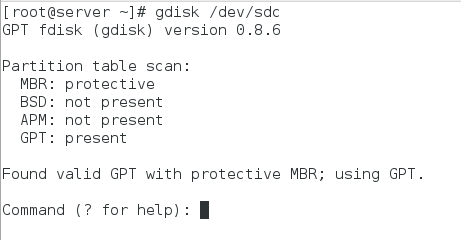 The d command is used to delete a partition. If there are multiple partitions, command will ask for partition number which we want to delete. Delete all partitions one by one. 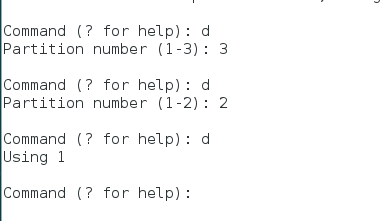 As we know whatever change we made in this utility will not apply until we save them with w command. Use p command to view the changes. If everything is fine, confirm the change and exit form gdisk. 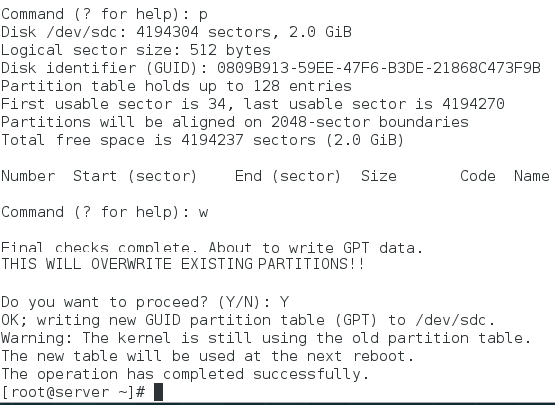 Right now we have deleted all partitions from disk but this disk still contains valid GPT record with empty partition table.

We cannot create MBR partition in this disk until we convert it back to MBR and vice versa a MBR disk cannot be used for GPT partition. Remember we started this tutorial with a MBR disk. So we had to covert that disk in GPT disk. If we use this disk in next practice we will be able to create only GPT partition. To make this disk blank again we have to replace first Mb of this disk with raw data. In second part of this tutorial when we started to work with this disk we took the backup of first Mb. Let’s restore that data back to the disk.

In second part of this article we took the backup of first MB in /root/backup/mbrbackupfile.

Now this disk is reverted back in its original state. It doesn’t contain any record or partition table. This disk will appear as a blank disk in any disk management utility.

That’s all for this part. In next part we will learn how to create and manage partitions with parted command.