To store IP addresses and other related settings, Linux uses a separate configuration file for
each network interface. All these Configuration files are stored in the /etc/sysconfig/network-scripts directory.

The following image shows a sample output of the /etc/sysconfig/network-scripts directory.

The following table briefly describes the files stored in this directory.

Settings stored in the interface’s configuration file are applied on the interface
when we start the system or activate the interface. To view these settings, you can use the
cat command. For example, the following command displays the settings of the eno16777736 interface.

The following image shows how a configuration file looks like. 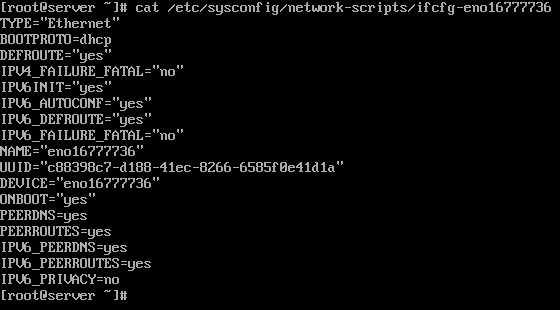 The following table lists important directives of this file with description.

Two directives that may appear in this file are; GATEWAY and NETWORKING.

If you run the \”ip addr show\” command and see no output or you start network service and it does not start then
it means all network devices are currently inactive. In this situation, the first thing that you should check
is the contents of the /etc/sysconfig/network configuration file.
This file either should not contain the NETWORKING directive or if it contains, its value must be set to \”yes\”.

To understand how the \”NETWORKING=no\” directive affects the network service practically, follow these steps in your test system.

The following image shows the status of network service when the /etc/sysconfig/network file does not contain the NETWORKING directive.

Next image shows how the \”NETWORKING=no\” directive affects the network service. 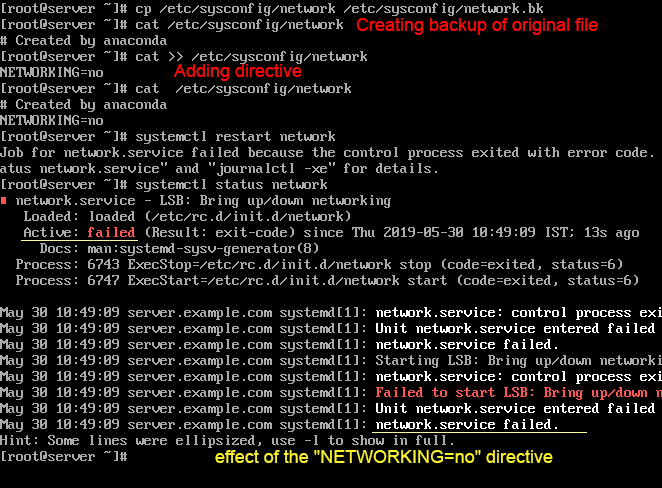 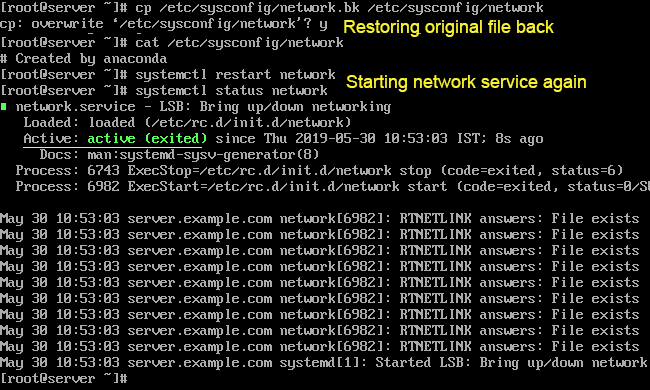 DNS server provides this facility in more dynamic and flexible way but also requires a lot of complex configuration.
Due to complexity, usually DNS server is not used in small networks.

The /etc/hosts file also provides this functionality in local system but requires manual mapping of all hostnames with their IP addresses.

Each row in this file represents a unique entry. It contains an IP address in the first column, full or official hostname in the second column and short or alias name in third column.

The following image shows an example of this file.

This file sets the hostname of the system. A hostname typically consists of two different parts;
hostname and DNS domain name in which the host resides. These two parts together make a FQDN (Fully Qualified Domain Name)
which looks like server.example.com

The following image shows an example of this file.

Just like other configuration files, you can use available commands to update this file or can edit it directly.

The following image shows an example of direct updating.

To apply the change in hostname either restart the system or logout from the current session. 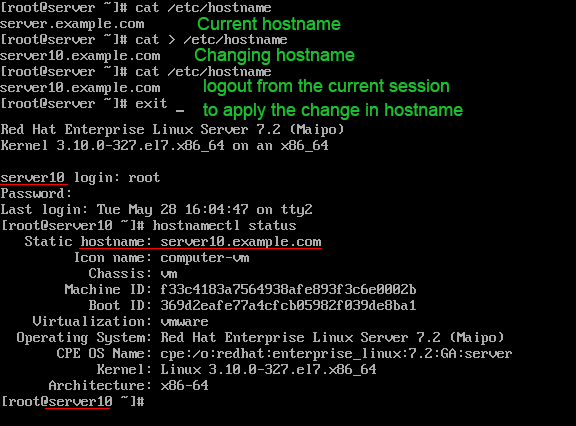