This tutorial explains the advantages and basic purposes of OSI model in detail. Learn why the OSI Model was created along with the purposes and benefits of the OSI model.

Technically, a networking model is a comprehensive set of documents that describes how everything should happen in network. Individually, each document describes a functionality, protocol or device that is required by a small portion of the network.

Why was the OSI Model created?

This situation was neither good nor profitable for both manufacturers and consumers. It not only forced manufacturers to make all essential networking devices but also forced consumers to buy all devices from the same manufacturer.

This tutorial is the first part of the article \”Networking reference models explained in detail with examples\”. This article explains following CCNA topic.

This tutorial is the second part of the article. It explains the seven layers of OSI model in details.

Similarities and Differences between OSI and TCP/IP Model

This tutorial is the third part of the article. It compares OSI reference model with TCP/IP model and lists the similarities and differences between both models.

Layered approach is the hierarchical way to address all required technologies and devices in effective communication. It allows vendors and manufactures to build and design specific application and hardware in one layer for particular purpose without affecting the entire network protocol stack.

OSI model uses this approach. It divides entire communication process in seven layers. Each layer describes a particular functionality along with the protocols and devices which are required to perform that functionality.

The advantages of OSI Model are following: – 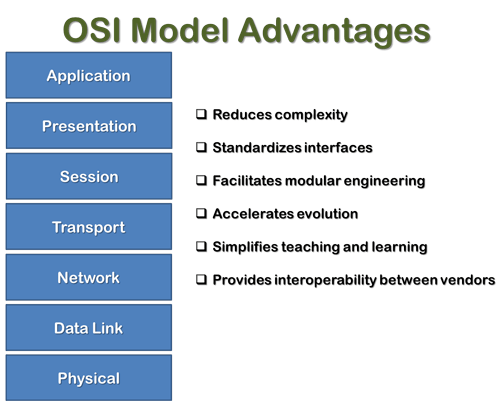 That’s all for this part. In next part of this article, I will explain the seven layers of OSI model in detail. If you like this tutorial, please don’t forget to share it with friends through your favorite social platform.