RHCE LAB Setup in VMware Workstation or in Virtual Box

For demonstration purpose I will use the practice lab which I created in first of this tutorial. 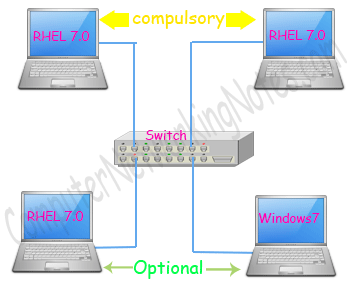 Every computer in a LAN segment requires a unique hostname. Hostname can contain alphabets, numbers, dash, underscore and dot characters. Maximum 64 characters are allowed in hostname. Usually hostname reflects the functionality of system. Hostname is stored in /etc/hostname file.

In earlier version of RHEL hostname was stored in /etc/sysconfig/network file. 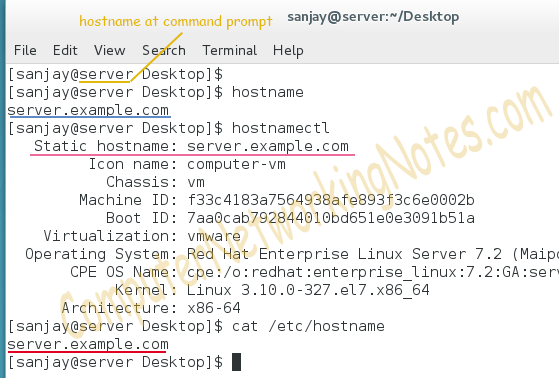 Let’s update the hostname of third virtual machine from second method. Open /etc/hostname file and set
the new hostname and save the file. 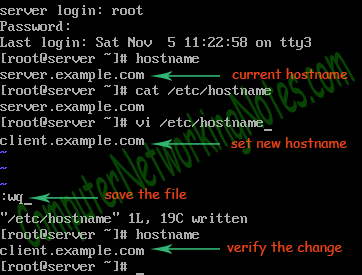 In our lab we have one more (optional) computer with window 7 installation. To update the hostname in Windows 7 follow the following steps:- 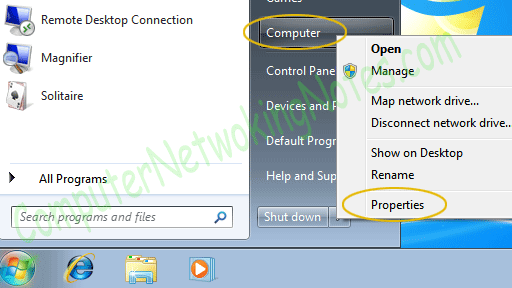 Restart the computers which hostname have been updated.

IP address is a 32 bit long software address. In IP network every computer needs this address to communicate with other computers.
A computer can obtain this address statically or dynamically. In static method we have to configure it manually.
In dynamic method it is leased from DHCP server. Static method is used for critical network resources such as server,
printer etc. Dynamic method is used for workstations or terminals.
To view the current IP configuration we can use ip addr show command.

As above figure shows NIC enol6777736 is configured with IP address 192.168.122.1/24.
If you have worked with RHEL-6 or earlier versions, you may be a little bit surprise about the name used by NIC.
A lot of things have changed in RHEL 7 including naming convention used by NIC. In earlier version NICs were named as
eth (Ethernet), em (embedded) and wlan (wireless lan). NICs were numbered based on the order of detection
during the system boot. For example first discovered Ethernet (eth) would be named and numbered as eth0.
This naming scheme has scalability issue. For example a system which has multiple NICs and NICs are dynamically
removed or added. In this situation this naming scheme will work not effectively.

Every NIC has an associated configuration file which stores its relative parameters such IP address, protocol and
configuration values. These configuration settings are automatically applied on NIC while it get activated.
RHEL uses a central location for all (NIC) configuration files which is /etc/sysconfig/network-scripts directory.

While running this tool make sure you are logged in from root user as normal user account is not allowed to make change in configuration. Execute nmtui command from root account on first computer (named – server). 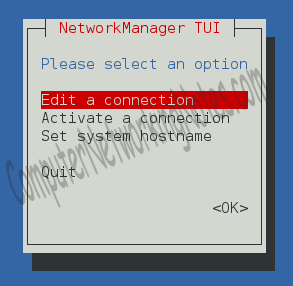 Select NIC from left pane on which you want to set the IP address and select Edit option from right pane and press Enter key. 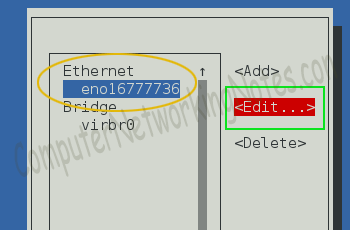 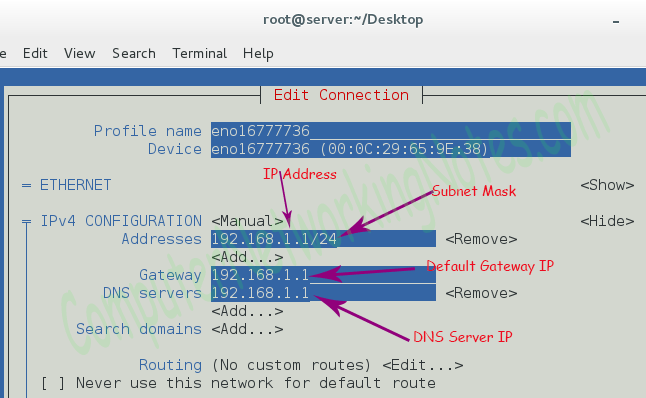 Select OK and press Enter key to accept the change 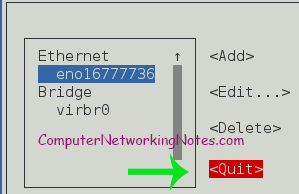 When we exit from nmtui utility, it automatically updates the associated configuration files.
For instance in above example we have assigned IP configuration to NIC eno16777736.
In this case nmtui will update the
/etc/sysconfig/network-scripts/ifcfg-eno16777736 file.
An interface restart is required to apply the new configuration.
We can use ifdown-[NIC] and ifup-[NIC] commands to
restart the interface. 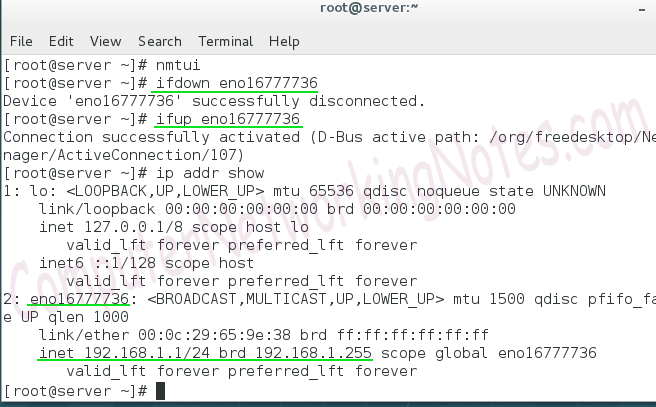 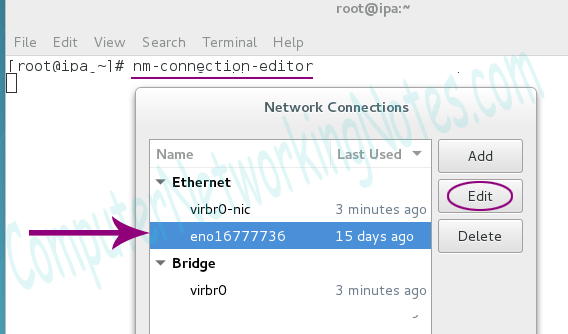 Switch to IPv4 Settings and select Manual option from Method drop down menu.
Click Add button and configure IP addresses in respective fields and click Save button and Close button at main screen. 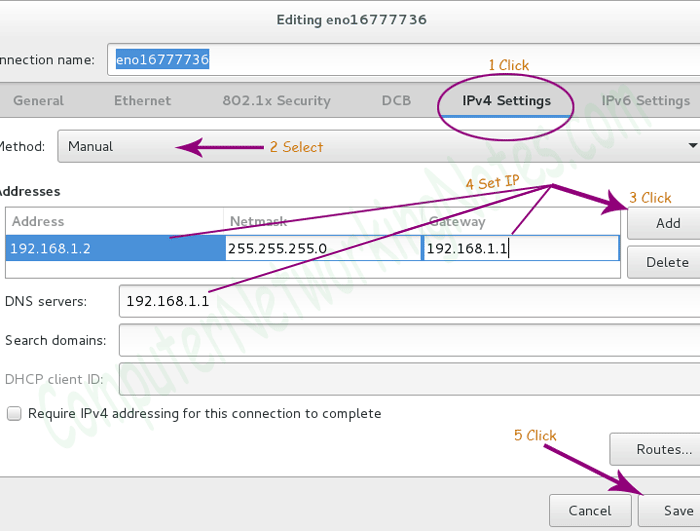 Restart the interface and verify the new IP configuration. 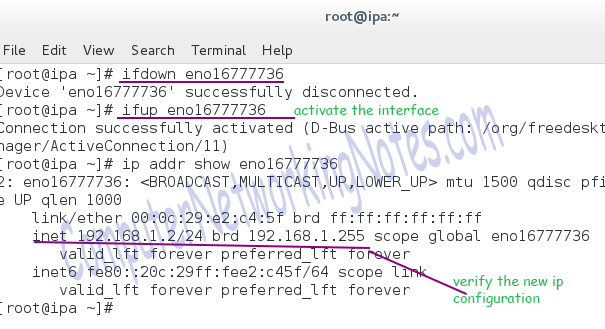 So far we have assigned IP addresses in two computers now it’s time to configure the third system (named – client).
This time we will use nmcli command to assign the IP addresses. Login from root account and assign IP addresses as
illustrate in following figure.

nmcli con show:- This command will list the available connections with their associated devices.

As above figure shows connection eno16777736 is associated with Ethernet device eno16777736. We have to modify this connection in order to update the IP configuration.

As we know new IP configuration applies on start-up. Next two commands will restart the interface. 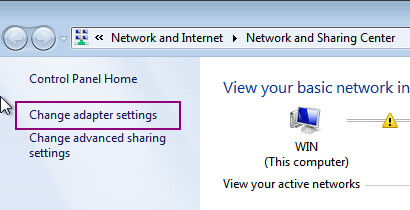 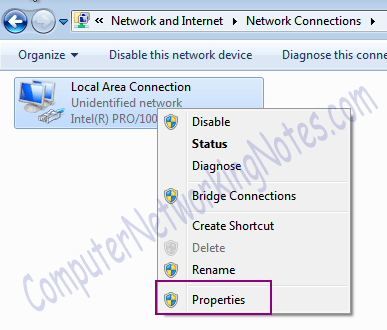 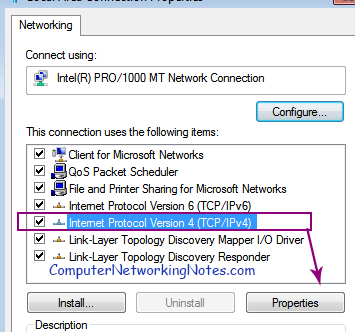 Set the IP address, subnet mask, default gateway and DNS Server IP address and click OK twice to save and close the configuration. 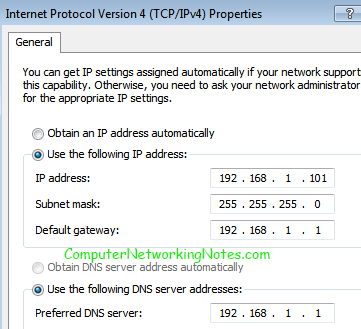 Computers access each other through the IP address. So from computer’s prospective we are all set to go.
But from human’s point of view we need one more setting. We need to map IP address with hostname so it can be accessed from hostname as well.

In a mid or large size network this process is done by DNS Server. In our LAB we will configure DNS Server in our first system (named – sever). DNS Server adds its own complexity in network. Due to this administrators prefer to skip this in small size or internal network. In absence of DNS Server host tables are used to map the hostname with IP address. Host table is stored in /etc/hosts file. This table maps IP addresses with hostnames of all computers on the local network.

Host table for our LAB will be following:-

default file may have entries for localhost which is the default hostname on RHEL system.

Remove the default entries and insert new entries as mentioned earlier and save the file. 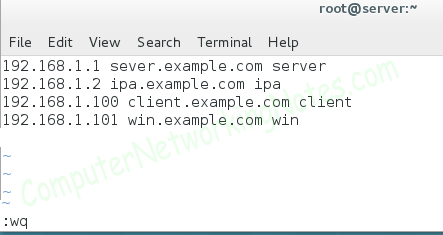 That’s all, our first computer is ready to access other computers from name. Repeat same process on remaining two RHEL systems (ipa and client).

Based on UAC setting windows may ask you to confirm the action. If asks, click yes. 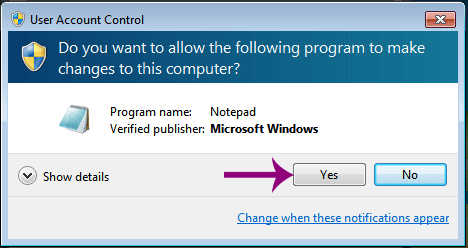 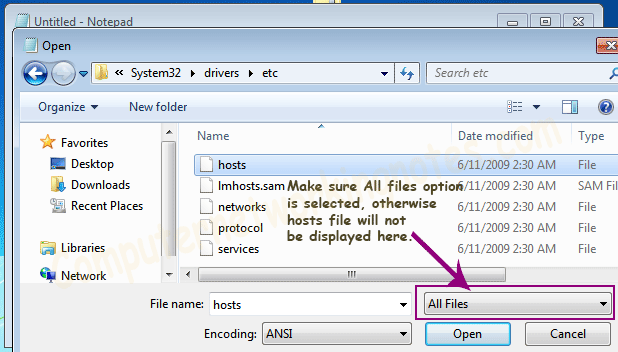 Make entries for all LAB systems and save the file. 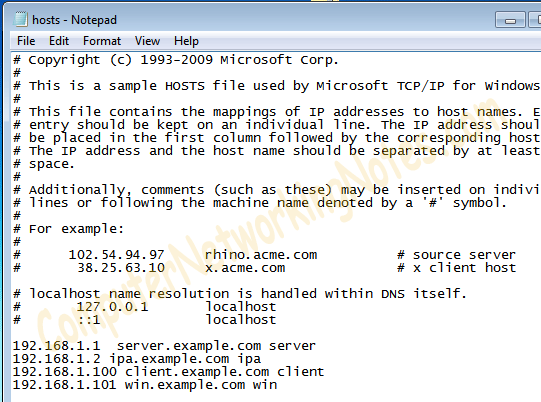 By default windows 7 has firewall turn on, which need to be properly configured before we can access it from network. Since we are preparing this LAB for RHCE and windows system will only be used to test services configured on Linux system, we can safely turn off the firewall. 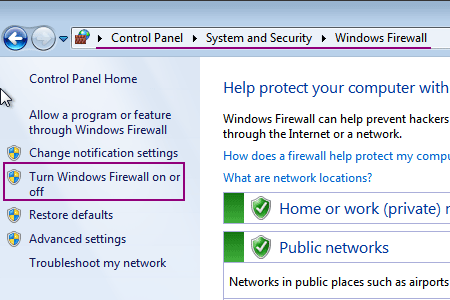 Turn off the firewall and save the setting. 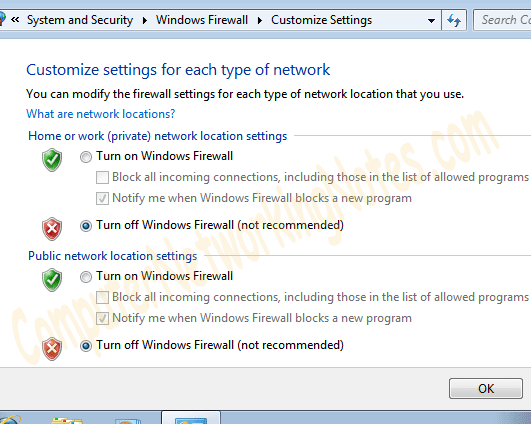 That’s all setting we need. Now all LAB systems should be able to communicate with each other’s. Let’s test our configuration. 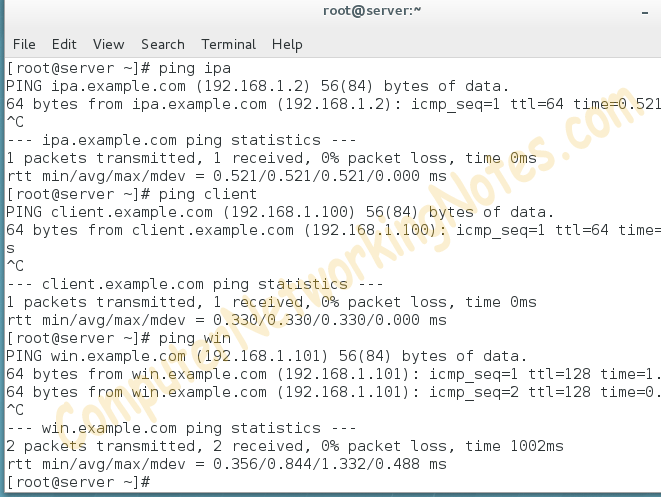 That’s all for this article.