This tutorial explains how to perform basic package management tasks (query, find, list, install, update, replace and remove) from rpm command in Linux step by step. Learn how to build a basic RPM package (from rpm-build and rpmdevtools commands) in detail with practical examples including RPM File Naming Convention.

Before installing a package we should always check Red-Hat version and hardware architecture.

A package should be installed only if both information matches. To install a package we can use two commands; rpm or yum.

Difference between rpm and yum

The biggest difference between yum command and rpm command is the way they deal with dependency hell.

RPM command works directly with packages, there is no easy way to deal with dependencies. We have to install all dependent package manually. While Yum command works with repositories which store all necessary information about packages including dependencies. Yum command automatically resolves dependency and installs all dependent packages with main package.

Where should we use which command?

If system is connected with working repository and desired package is available in repository, we should always use yum command.

Yum command is explained in detail with examples including how to create a local repository in this tutorial.
How to configure yum repository in RHEL Linux

In this tutorial we will focus on RPM command.

To get a list of all available options with description we can use –help option. 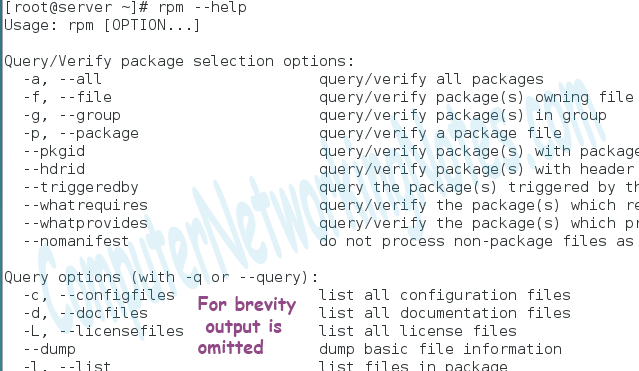 Let’s take few examples to understand query operation in more details.
To list all installed packages in system, we can use following command. 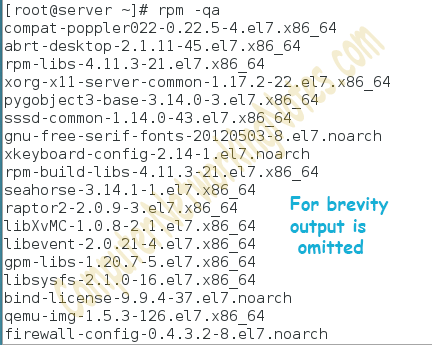 Following figure illustrates the use of above commands

To get more detailed information about a package such as version, release, architecture, group,
size, build date, install date, license and vendor we can use following command.

For example to get more information about httpd package we will use following command. 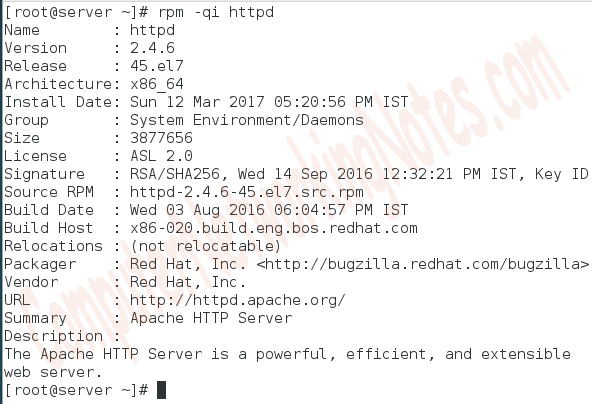 As we know rpm command is not strict about the source of rpm. Virtually we can install package
from any source with rpm command. This flexibility creates a serious security risk.
A hacker may hide malware in package. Since install operation is performed under the root privilege,
malware will also be installed in system with this package. For this reason yum command installs packages
only from trusted repositories. By following same recommendation, we can also limit security risk with rpm command.
We should always install packages only from well-known sources and before installing the package we should always make sure that
it does not contain any rogue scripts.

Let’s understand this with an example. Suppose we want to install the vsftpd package which provides FTP server.
We have downloaded this package from internet. If there is no internet connection, we can use
RHEL installation disk to simulate the download. To be sure that this package doesn’t
contain any malicious scripts we will use following command 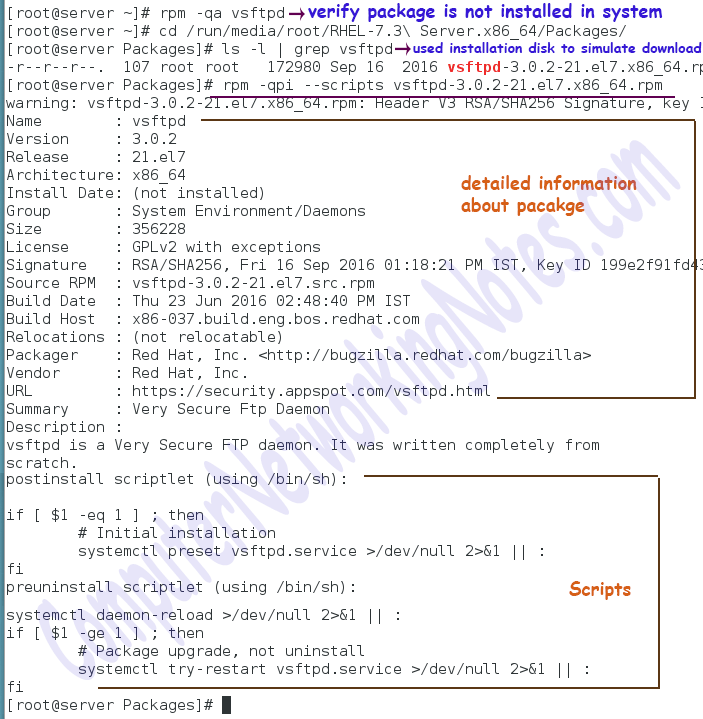 Usually Linux applications have associated configuration files. These files are used to control the behavior of
applications. Remembering the path of each configuration file is next to impossible. RPM query
operation can help us in finding right files associated with an application. Let’s understand
it with an example. Suppose we don’t know which files are associated with ssh command.
To find out the answer we first have to find out the package which provides ssh command.
For this we can use -f option. The -f option needs at least one file name
as argument. As we know each command in Linux has an associated script file which executes when we run that command at shell prompt.
We can use this file as the argument in rpm command.

Let’s understand it step by step.

First we will execute which ssh command. This command will print the script file name (with absolute path) which executes when ssh command is run at shell prompt.

Now we have one file name with absolute path which is associated with ssh command. We can use this file name as argument to find out the package name.

We can also combine both commands in single command with shell scripting.

Following figure illustrates the use of above commands and options 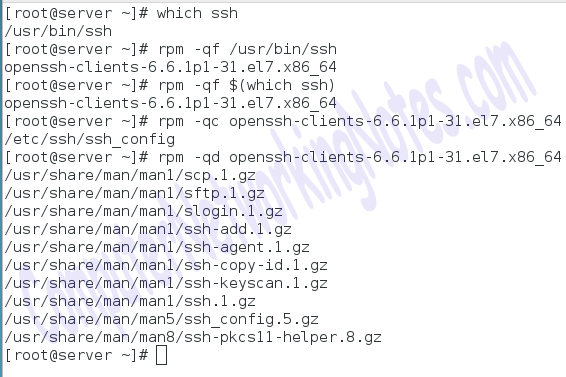 To list all associate files with package including configuration files and documentation files we can use -ql option. 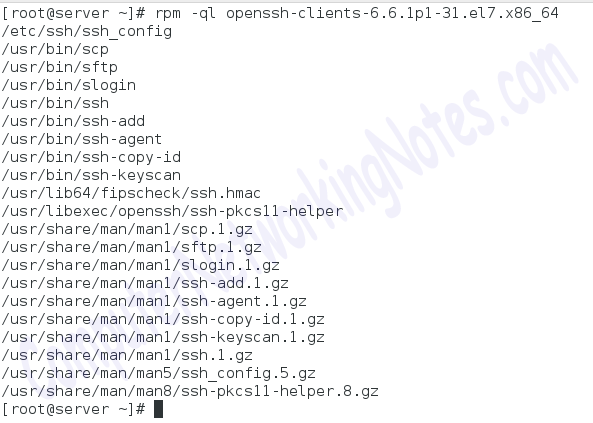 Basic syntax to perform these operations is following

Operation is the options which decide what action rpm command should take on specified package.

Source of package is the specified package. (Absolute path is required for install/update/replace operation.)

Following table lists some common options used for these operations

Let’s take few examples to understand these options in detail.

To install a package we use -ivh options. For example following command will install the vsftpd package in system.

To remove a package we use –evh options. For example following command will delete the vsftpd package from system.

As we know rpm command doesn’t resolve dependency. So whenever it encounters a package which depends on
other package during the installation, it fails the installation with error message related to required dependencies.
We must have to install those dependent packages before this package.

We have two possible solutions to deal with this situation. Either we install all dependent packages before this package or
forcefully ignore the dependency error.

To install a package without dependency we have to use –nodeps and –force options.

Two packages are required to build a simple RPM; rpm-build and rpmdevtools.

The rpm-build package provides rpmbuild command which is used to build the RPM package from source code.

The rpmdevtools package provides rpmdev-setuptree and rpmdev-newspec command which are used to build necessary directory structure and configuration files.

Create a normal user account and switch to its home directory.

There is no need to create above directory tree manually. The rpmdev-setuptree command will do this job in appropriate manner.

We have prepared the base of RPM. Let’s add some source code in it. Make a directory outside the rpmbuild directory and create a sample file in it.

Finally we have to create a specification file which holds all essential information about the package.
Move in SPECS directory and run rpmdev-newspec command. This command will generate a template file. 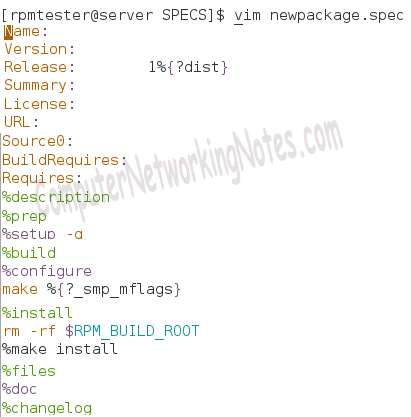 Update this file as illustrated in following figure and save the file. 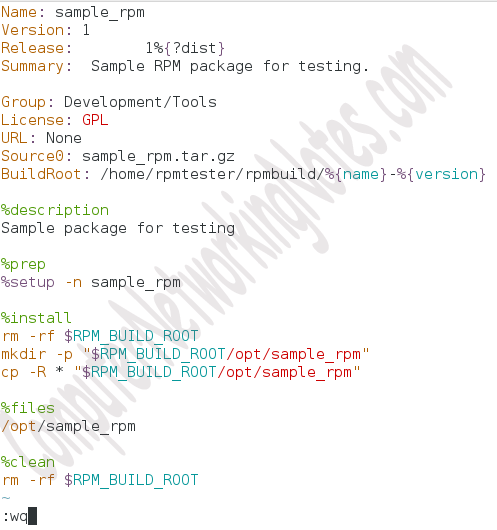 That’s all we need to bake this basic RPM cake.

Run following command to build a RPM with this specification

In few seconds our basic rpm will be ready in RPMS/x86_64/ directory.

This package installs a file sample_file in /opt/sample_file directory. Let’s verify the package and installation process.

Great Job! We have successfully built, installed and tested the custom package. Now it’s time to cleanup the system. Remove this package.

That’s all for this tutorial.