Why OSI model is still taught in networking courses?

In terms of explanation and documentation, TCP/IP model stands nowhere near the OSI model. OSI model is one of the best explained and well-documented models ever created in computer networking world. It describes complex networking concepts, protocols and terms in such a manner that is not only easy to understand but also easier to remember.

Since both TCP/IP and OSI model were created to achieve the same goal, they both use the same set of open standard protocols and describe the networking concepts in similar manner. By learning one model, you can easily learn the other model.

For this reason, even OSI model is no longer supported and used by hardware manufacturers, still it is taught in almost all networking courses. Once students learned the OSI model, they are introduced with the TCP/IP model. Since they have been already learned the foundation topics and layered approach from OSI model, learning TCP/IP model becomes much easier for them.

This tutorial is the first part of the article. It briefly explains the reasons why OSI model was created along with the advantages.

This tutorial is the second part of the article. It explains the seven layers of OSI model in details.

The original version uses a single layer (Link layer) to define the functionality and components which are responsible for data transmission. The update version uses two layers (Data Link and Physical) for this.

In updated version, the name of Internet layer is changed to the Network layer. 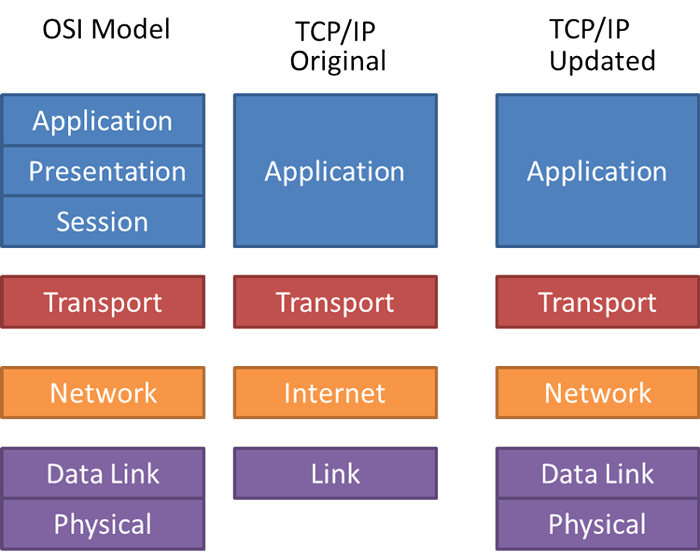 No matter which model you study or learn first, once you learned one you can easily correlate it with other. In general comparison updated TCP/IP model is much or less similar to the OSI model except the application layer. For the purpose of learning, you can think application layer of TCP/IP does what top three layers (application, presentation and session) do in OSI model.

That’s all for this part. In next part of this article, I will explain TCP/IP model and its layers in detail. If you like this tutorial, please don’t forget to share it with friends through your favorite social site.