This tutorial explains I/O (Input/Output) redirection with examples. Learn what the STDIN, STDOUT and STDERR are and how they work in Linux along with common file redirectors such
as >, >>, 2>&1, <, /dev/null, /dev/tty1 and /dev/sda in detail.

This tutorial is the last part of the article \”Linux file system and shell explained with file redirectors\”. It explains following RHCSA/RHCE objective.

Other parts of this tutorial are following.

This tutorial is first part of the article. It explains Linux file system structure (Linux directory structure) in detail along with naming convention used in kernel name.

STDIN & STDOUT: – User types a command from keyboard (STDIN) at shell prompt and hit the Enter key. If command exists, shell executes that command and displays the result on monitor (STDOUT).

STDIN & STDERR: – User types a command from keyboard (STDIN) at shell prompt and hit Enter key. If command does not exist, shell displays the error on monitor (STDERR).

When we access a file, Linux creates an entry point in Kernel which is used to uniquely identify that file in running session.
This identifier is known as file descriptor. File descriptor is a non-negative integer value. First three file descriptors 0, 1 and 2 are reserved for STDIN, STDOUT and STDERR respectively.

File descriptors not only allow shell to accept input commands from any source but also allow shell to send the output or error of these commands on any destination. Unless we manually specify the device for STDIN, SDTOUT and STDERR, shell uses the default devices.

If non-standard source (STDIN) or destination (STDOUT/STDERR) is used, we have to specify that manually.

Let’s take an example. A script automatically executes, when a user is logged in, and sends its output to the log server.
In this case, since shell is receiving commands from the script instead of a standard input device, it must have to know where it should
send the output generated from those commands.

Let’s understand each command in deail.

Second command also lists the content of current directory. But instead of displaying output on monitor (default standard output device), it sends that output in a file named test.

Third command displays the content of specified file on monitor.

Fifth command also prints the specified string. But instead of printing it on standard output device (monitor),
it prints that in a file named test. Since the file test already contains data, its content will be overwritten.
We can verify this by running third command again.

Sixth command also prints the specified string in a file named test. But instead of overwriting, this command appends the file.

Seventh command takes its input from file instead of standard input device (keyboard). 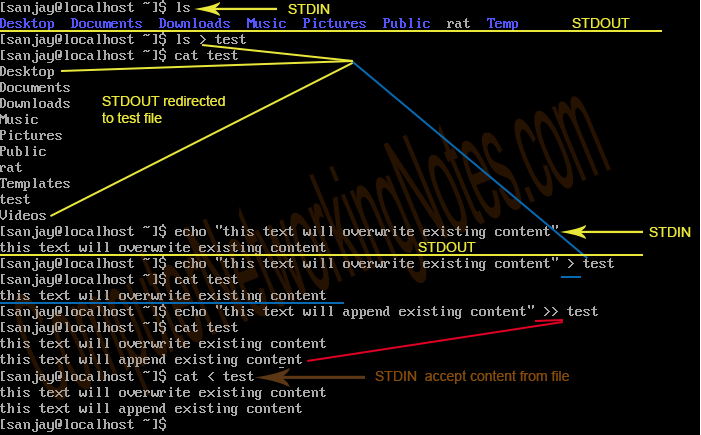 Pipes make I/O redirection more flexible. It allows us to redirect the output of one command into other command as input. 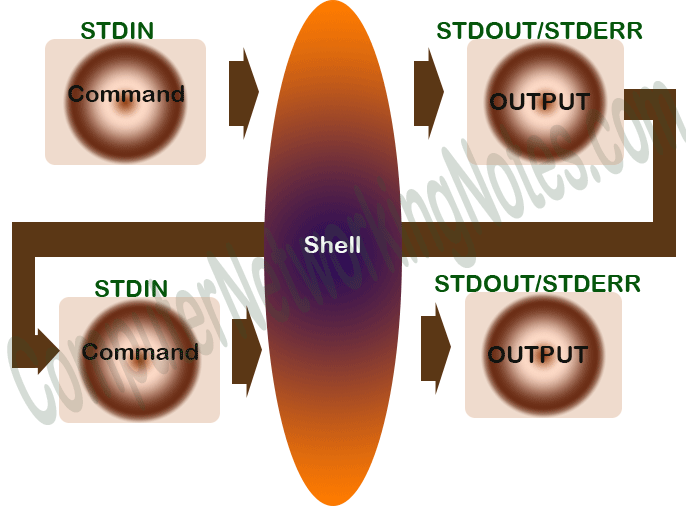 Shell allows us to combine multiple commands using pipes. To combine commands use pipe (|) sign between them.

This command redirects the output of first command (cat) in second command (wc) as input.

When using pipes, only the output of last command will be displayed on standard output device (monitor).

That’s all for this tutorial. In next tutorial we will learn another RHCSA/RHCE tutorial in detail with examples. If you like this tutorial, please don’t forget to share it with friends.