This tutorial explains what the STP protocol is and how it removes loops from the network. Learn STP features and functions in detail with examples.

What is the STP?

The below section explains how all it happens and what terminology and components the STP uses in its operation.

BPDUs (Bridge Protocol Data Unit) are multicast frames which switches use to share information about themselves and their connections.
Besides sharing information, switches also use BPDUs to learn the network topology, to learn which switch is connected with which switches,
and to learn whether any layer 2 switching loop exists in the learned topology or not.

Based on the connected media link, STP assigns a value to each port of the network. This value is known as the port cost value. STP uses this value to choose the single best path when multiple links are available between two switches. It selects the port which has the lowest port cost value.

There are two sets of the port cost value. The following table lists both.

All ports on a STP running switch, go through the four different states; blocking, listening, learning, and forwarding. Through these states, the switch not only understands the network topology but also calculates the path cost value and based on that value elects the designated and non-designated ports. After these states, the switch is considered as the STP convergent switch. Let’s understand each state in detail.

When we power on a switch, the switch puts all of its ports in this state. In this state, the switch only listens and processes the BPDUs. Except the BPDUs, it drops all other frames. From the incoming BPDUs, it learns the network topology and determines the ports which will work as the root ports, as the designated ports, and as the blocked ports.

In this state, ports still listen and process only BPDUs. All other frames except BPDUs are dropped. The switch double checks the layer 2 topology to make sure that no loops occur in the network before processing the data frames. Ports remain in this state for fifteen seconds.

In this state, the switch listens and processes both BPDUs and user frames. It uses BPDUs to monitor the network topology. By reading the source address field of users’ frames it also builds and updates CAM table entries. This state is also referred as the convergence.

This state applies to all ports which are either manually shut down or removed from the STP by an administrator. All unplugged ports also remain in this state. Any port which belongs to this state does not participate in the STP operation.

The following image shows how the STP changes a physically looped topology into a virtually looped free topology. 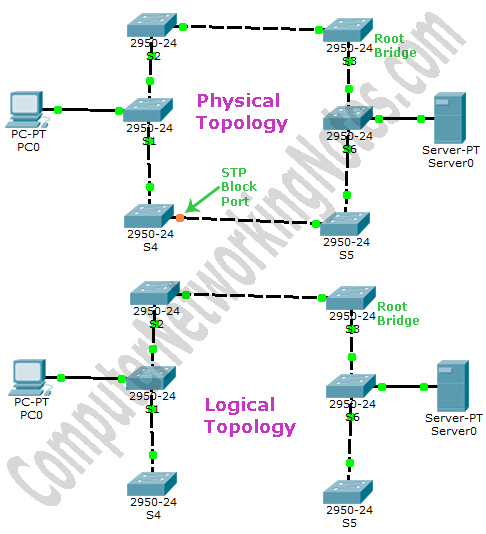 The following image shows a sample output of this command from both the root bridge switch and a member switch. 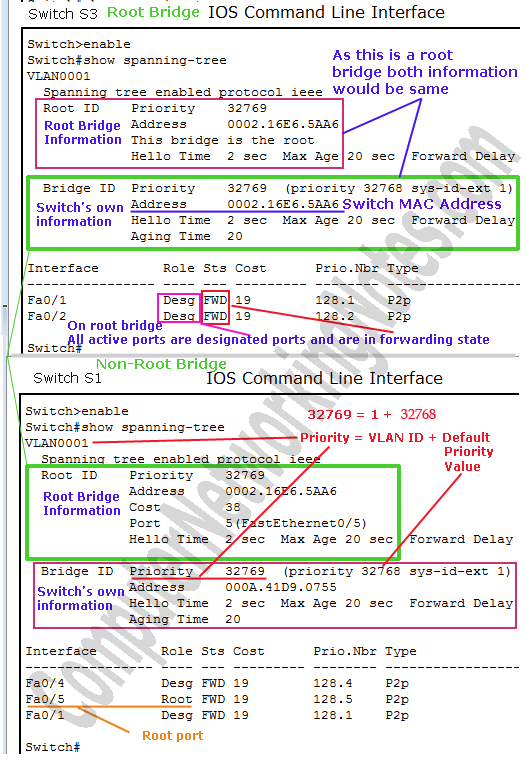 There are two different implementations of the STP protocol, DEC and 802.1d. Both implementations are not compatible with each other. When you purchase a new switch for the network, make sure it supports the same variation of the STP which your existing switches are using. Never mix the devices which are running 802.1d’s STP with the devices which are running DEC’s STP, otherwise, you might run into the layer 2 looping problems. All of Cisco’s switches use 802.1d’s STP.

That’s all for this tutorial. If you like this tutorial, please don’t forget to share it through your social network.