This tutorial is the last part of the article \”grep command in Linux explained with options and regular expressions\”. Other parts of this article are following.

This tutorial is the first part of the article. It explains grep command options and regular expressions with special meanings of Meta characters.

This tutorial is the second part of the article. It explains how to use options with grep command in detail with practical examples.

This tutorial is the third part of the article. It explains how to use regular expressions with grep command in detail with practical examples.

How to use extended regular expression

Extended regular expression uses the Meta characters which were added later.
Since later added characters are not defined in original implementation, grep treats them as regular
characters unless we ask it to use them as Meta characters.

To extract all links from an html file named html_file, use following command.

Let\’s understand above command in detail.

o:- By default, grep prints entire line which contains the search pattern. This option instructs grep command to
print only the matching words instead of entire line.

i:- This option ask grep command to ignore the case while matching the pattern.

<a :- Starting point of anchor tag.

+ :- Match preceding one or more time.

So far this search string says, search for the text which starts with <a and contains anything after it except >
sing (because this sign is used to end the tag and we need some values before end otherwise it will become <a >
which is not a valid anchor tag) and ends with > sign.

This string is followed by a Meta character + which instructs grep command to match it one or more times.

Collectively above search patterns says search a text string which

In more simple language <a some value > any value </a>.

Following figure illustrates the use of above regex

If you are interested only in anchor tags, you can exclude the expression which prints the linked text as following.

To extract all links or URLs from an html file and save them in a text file, we have to combine three commands. These commands are: –

We have to combine these commands in following way. 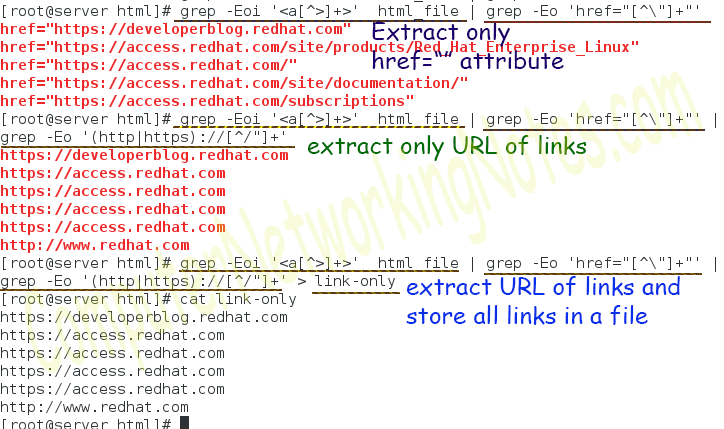 That\’s all for this tutorial. If you like this tutorial, please don\’t forget to share with friends through your favorite social site.