This tutorial explains how to create and assign VLAN, VLAN Membership (Static and Dynamic), Router on Stick and Spanning Tree Protocol (STP) in detail with practical examples in packet tracer. Learn how to create and manage VLAN in Cisco switch step by step.

Create a practice lab in packet tracer as shown in following figure or download pre-created practice lab from second part of this tutorial. 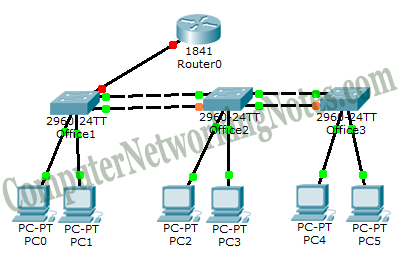 This is the last part of our article \”VLAN, VTP, DTP, STP and Router on Stick Explained with Examples\”. You can read other parts of this article here:-

This is the first part of this article. In this part we explained basic concepts of VLAN such as What VLAN is, Advantage of VLAN, VLAN membership Static and Dynamic, VLAN Connections; Access link and trunk links, trunk tagging and how VLAN add additional layer of security with examples.

This is the second part of this article. In this part we explained how to create a practice lab in Packet Tracer. You can create practice lab by following the instruction or alternatively download pre created lab. This lab will we used to demonstrate the configuration part of VLAN, VTP, DTP, STP and router on stick.

This the third part of this article. In this part we explained VTP mode with examples including VTP Server mode, VTP Client mode and VTP transparent mode. Later we configured VTP protocol in our practice lab.

vlan vlan number command is used to create the VLAN. 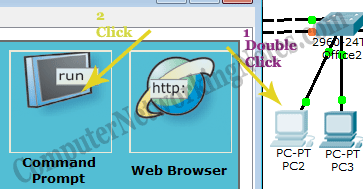 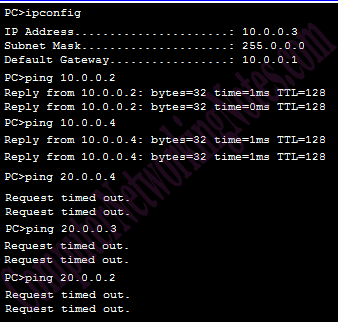 Same as VLAN 10, PCs from VLAN 20 must be able to communicate with other PCs of same VLAN while they should not be able to access VLAN 10. 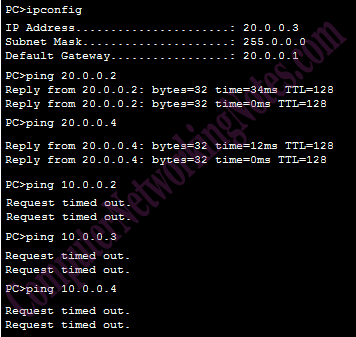 Congratulations we have successfully achieved one more mile stones of this article.

Typically routers are configured to receive data on
one physical interface and forward that data from another
physical interface based on its configuration.
Each VLAN has a layer 3 address that should be configured
as default gateway address on all its devices.
In our scenario we reserved IP address 10.0.0.1 for
VLAN 10 and 20.0.0.1 for VLAN 20.

With default configuration we need two physical interfaces on router to make this intra VLAN communication. Due to price of router, it’s not a cost effective solution to use a physical interface of router for each VLAN. Usually a router has one or two Ethernet interface. For example if we have 50 VLANs, we would need nearly 25 routers in order to make intra VLANs communications. To deal with situation we use Router on Stick.

Router on Stick is router that supports trunk
connection and has an ability to switch frames between
the VLANs on this trunk connection.
On this router, single physical interface is sufficient to
make communication between our both VLANs.

That\’s all configuration we need to switch VLANs. Now we can test different VLAN communications.
To test intra VLANs communication open command prompt of PC and ping the PC of other VLAN. 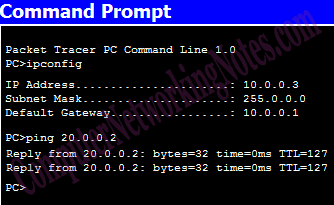 STP is a layer 2 protocol, used for removing loops. For backup purpose we typically create backup links for important resources.
In our scenario, all offices have backup links that create loops in topology.
STP automatically removes layer 2 loops. STP multicasts frame that contain information about switch interfaces.
These frames are called BPDU (Bridge Protocol Data Units). Switch use BPDUs to learn network topology.
If it found any loop, it will automatically remove that. To remove loop, STP disables port or ports that are causing it. 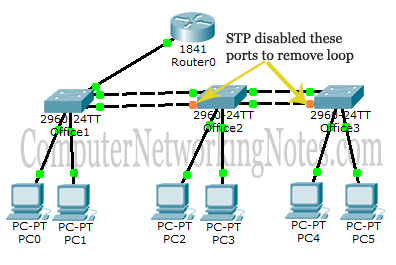 Use this configured topology for cross check if you are not getting the same output after following all steps.

That\’s all for this article. I hope you have enjoyed this tutorial.